This last week was the first week back to school after the winter fortnight’s school holidays in Victoria, Australia. Even though we homeschool, we still take the time to have a break from formal school work. I set challenges for the kids based on what I would like them to learn, practice doing etc and they get points depending on what they do. Once they reach 200 points, they get a reward. The kids love this so much that they tend to do more school work during the holidays and enjoy it so much better. They play a lot of games, make Lego structures, read a lot, compose songs etc for these rewards.

I find that when we return to “normal” schoolwork, then they don’t grumble and complain as much. This time, there were no complaints. Matey’s reading is going along well, something he has struggled with, but it seems to be finally ‘clicking’ into place. We had an appointment earlier this week to get his language assessment results back, knowing that we need to do some work with a speech therapist. I know without a doubt that this will end up being one of his strengths, but at the moment it holds him back. There is no point in ‘sticking my head in the sand’ and not addressing the issues. Thus, we have seen multiple health professionals in the last few weeks for assessments of all sorts. Thankfully, the problem seems to be something that we can work on fairly easily.

One day last week, this was the mail that we received. The kids are Lego Club members and Matey in particular loves reading everything in the club magazine. He then spent the rest of the day designing new Lego structures and reading the magazine. Princess entered the Australian Mathematics Competition last year and did extremely well, earning a prize for being in the top few for grades 3 and 4 combined (although she was only grade 3). Disappointingly for her, the prize was maths books from their website. The redeeming feature was the carry bag. She loves books, just not maths problems books. Her prize came the same day. The White Pages Business Phone Books were also delivered and this filled in a few hours as the kids played a number of games using the book, the most popular being find the phone number for ……. Company. Great practice at alphabetical listing!! Since we have no use for these cumbersome books when we can google the number on the Internet, I am thinking of using the books for a paper mâché project. Am trying to help the kids see that you can use the things around you for other uses and it doesn’t have to cost you money.

We commenced our school days this week with a new routine. We have to be all dressed, eaten breakfast, washed and wiped up and the clothes washing on before 9am. Then the kids take it in turns each day to choose a piece of ‘soaking’ music (easy to listen to music that allows our thoughts to centre on God). We spend the next 3-5 minutes focussing on God and what He wants to say to us. I found it worked a lot more effectively if I asked a couple of questions or gave a couple of instructions during that time for it to be a guided imagery time. eg Imagine Jesus comes and takes your hand. Where does He want to take you? What does He want to show you? What Is He saying to you? One day Jesus took them to their bedroom in Heaven, another day to a playground in heaven.

After sharing what happened, we then do about ten minutes of cross body exercise to get the left and right side of the brain communicating. I find that Matey in particular responds to this with his ability to read to me a lot smoother. We then get straight into reading, maths, writing. There are other changes I wish to implement here but it takes time and effort and I want to solidify these two changes into our routine first.

Matey also had a number of episodes of vomiting last week, (gastric flu according to the G.P.), thus our activities were curtailed. When he is feeling sick, he loves lying on the couch and having me read him books. Thus, plenty of books were read. His favourite at the moment is the Australian Geographic series of “Our Australia” by Phil Kettle about Taha exploring Australia with his mum. A great series we have borrowed from the local library. Great for initial learning about parts of Australia. Suited to ages 6-10 years. 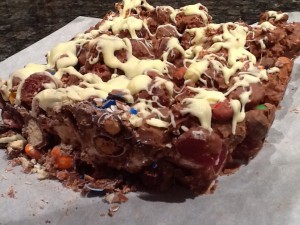 Princess is loving cooking at the moment and made ‘Rocky Road’, a very rich and delicious slice. She also baked a spicy carrot teacake as well, although she did state that she wouldn’t make that again as there was too much washing up to do after cooking it. One of the rules is that she has to clean up after herself. She made it whilst I was out and my husband encouraged her to use a lot of different equipment to grate carrots, electric beaters to beat it instead of hand mix, proper scales to measure ingredients etc, thus a lot of extra equipment was used.

Ministry Highlights
Our family is all involved in our church’s Healing Rooms held one Saturday morning per month. People are welcome to come along and receive prayer for whatever they like. We believe it is important for our children to be involved in ministry with us, where appropriate, and our kids enjoy being on both the Prophetic Team and the Healing Rooms Team. Their level of involvement varies, but they get very excited when they see miracles occur. Last week there were a lot of people with really major health issues and they really needed God’s supernatural intervention in their lives. It is so exciting to be part of something like this that brings God’s presence to people in such a tangible manner. Afterwards, we went out for lunch with some of the other team members. Not only was it to a Chinese Restaurant, the kids’ favourite, but we believe that it is important for our kids to be around others involved in ministry. So much is “caught, not taught”!!

Sunday afternoon they were able to witness their close friends and neighbours get baptised. I was really impressed with Princess who, upon seeing the new book we had bought for one of the boys as a baptism present, saw that the book was damaged on the top corner. She went to her bedroom and exchanged it for one she had of her own that was in perfect condition. The book was “David Livingstone” by Janet & Geoff Benge, part of the “YWAM Christian Heroes Then and Now” series. Princess is very particular about keeping her books in great condition, so for her to give away her copy in perfect condition and to replace it with a damaged copy was big for her.

We also attended a dinner on Saturday night where 2 different lots of friends reported back with an audiovisual presentation of mission trips they had just returned from. One family had led a group to Madagascar and that was exciting as we knew one of the families living there involved in the mission. In fact, this family stayed in their house with them whilst there. It involved helping at the orphanage and visiting the local garbage dump where many families live and giving food and medical care to those living there. The other couple went to an Asian area and reported back about the multitude of things they were involved in over there with helping people.

Leadership Training
I have run a homeschool basketball coaching session on a weekly basis for the last three years. This week I handed the organisation and running of this group over to another mum. After the older kids basketball session this week, the coach was unavailable for the younger kids session for kids aged 5-8 years. Matey had come off the court five minutes before the session ended and had promptly vomited all over himself and me. Princess and her friend, both aged ten years, were then asked to coach the second session. It didn’t suit me to wait around for another hour, plus we had also planned for Princess and me to go shopping for bathers for her. I realised that this was a unique opportunity, thus she was allowed to coach the younger ones. The benefits were that she now has a whole new respect for coaches. The younger kids had stated a few times during the session that they didn’t like certain games, skill learning sessions etc. combined with learning to “think on their feet”, meant that it was a great learning experience for Princess and her friend. It also meant that Matey & I could go home and shower whilst her friend’s mum dropped Princess at home after the basketball. We still got to go bather shopping as well, just not for as long.