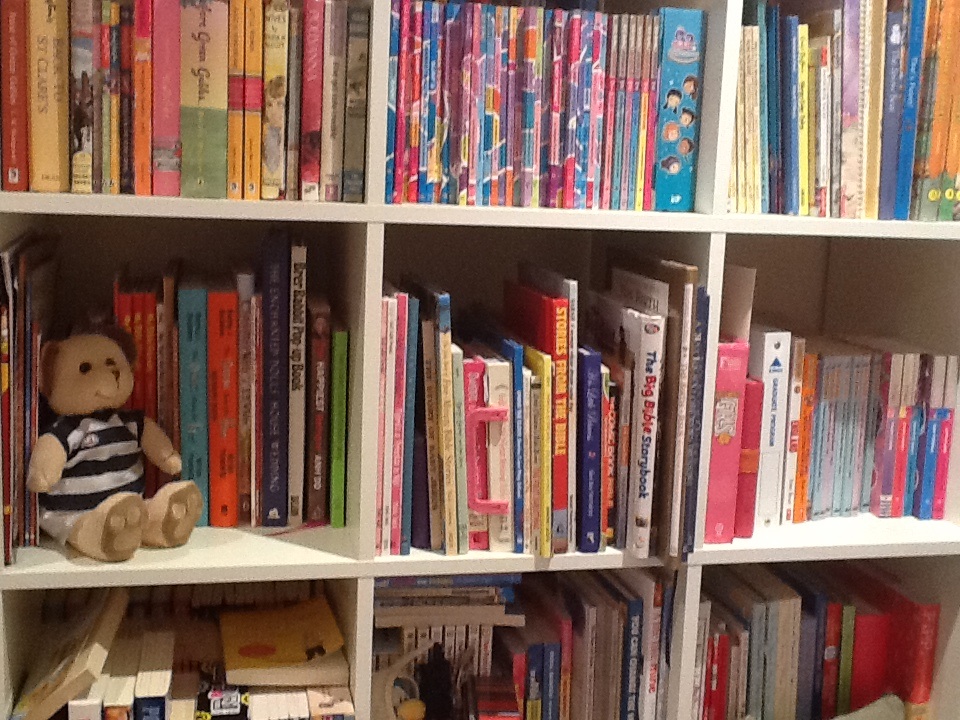 One of the best and most effective tools we can ever give our children is the love and gift of reading.

Jacqueline Kennedy, former First Lady of the United States of America, once stated, “There are many little ways to enlarge your child’s world. Love of books is the best of all.”

Most parents, from the time their child is a babe, read nightly to their kids. Our local maternal & child health council department give each new parent who is on a low income an Australian book to help them in their access to good books.

Our house is stocked with plenty of books. I have managed to source a lot of books secondhand, thus saving a lot of money. We have a great local op shop that used to have books cheap – 10 cents per book. They have now increased the price to $2 per book which is not a good saving unless it is a book you really want. My kids love their books and keep them in excellent condition.

Katherine Paterson, an American author of children’s novels, said, “It is not enough to simply teach children to read, we need to give them something worth reading. Something that will stretch their imaginations – something that will help them make sense of their own lives and encourage them to reach out towards people whose lives are quite different from their own.”

One of my priorities with my children has been to make sure that I have the next level of books ready for them. My role is to have them available (feed them) the books with the values I want to see developed or challenged in them.

My daughter was an early reader. She was reading “Little House on the Prairie” in grade 1.  I had to be careful, though, that the values were appropriate in the level of books read. Since she could read books that were far advanced for her age, books often contained stories about boy/girl relationships which I didn’t approve of at that age. 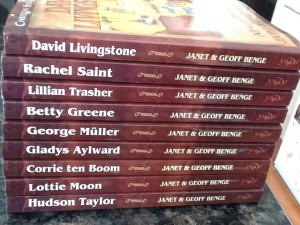 After our family returned from living in Mozambique for three months and attending a mission training school, my 8 year old daughter at the time was interested in missionaries. I found some great ones in an enticing narrative form. Janet and Geoff Benge wrote a series published under YWAM Christian Heroes Then and Now. Princess’s favourite ones have been Lillian Trasher, Gladys Aylward, George Muller, Rachel Saint, Nate Saint, Betty Greene, Hudson Taylor. In fact, I don’t think there was one in the whole series of 30+ books that Princess didn’t love. They also wrote an American History series which includes biographies about people like Thomas Edison, George Washington Carver, Abraham Lincoln, etc. My husband suggested that I buy the whole series. I was horrified initially as the expense for the total series would be approx AUD $350. What a huge amount of money. Instead, it was the best way I could have spent $350. It was a very cheap way of installing in my daughter a love of missions and a great grasp of world Christian missions. I also realise now that my son will also read the series, plus I have also loved reading them. Thus, I believe we have certainly “got our money’s worth”.

Interestingly, about six months later, we received a newsletter from missionary friends who were travelling up the Amazon River. Their newsletter included the names of the places where they travelled through and stopped. Princess was so excited as she recognised the names from when she had read about Rachel Saint, Nate Saint and Betty Greene. 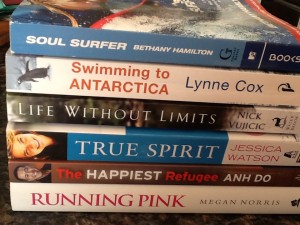 One of the downfalls of having a child read competently early on is that my daughter preferred to go to bed of a night and read to herself as that was a lot quicker. It also meant that she missed out on important parent/daughter time. Last year I realised this so I sourced a number of books  about people who have done extraordinary things. We started with “Running Pink”, Megan Norris’ account of Deborah De William’s inspiring story of an 18,000 kilometre run around Australia raising money for a cure for cancer. This lady had previously walked around Australia raising money for Kids Helpline. Deborah actually ran a huge number of miles with broken bones in her foot. We would take it in turns reading a chapter to each other every night. It is amazing the positive effect on our relationship that this had plus also the opportunity to discuss pertinent issues that came up.

Our next book was “Swimming to Antartica” about Lynne Cox. This was very inspiring as Princess had just commenced swimming squad training. Lynne’s courage, her determination and her ability to endure despite obstacles were excellent life skills to read about.

Princess’s all time favourite is “Soul Surfer”, Bethany Hamilton’s story. Bethany is one of Princess’s heroes and is such a great positive role model. 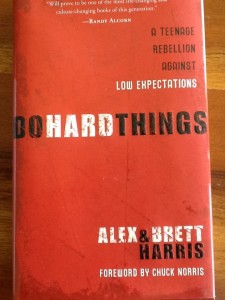 The books we have chosen as the next to read are: “True Spirit”, Jessica Watson’s solo non supported around the world sailing trip as a 16 year old, Nick Vujicic “Life without Limits”, and Anh Do’s book, “The Happiest Refugee”. First though, we are going to read Alex & Brett Harris’ “Do Hard Things”.

I once heard John Maxwell, a Leadership Guru from America, once explain why he didn’t give his kids pocket money. Instead he paid them to read leadership books. He finished by stating, “Not that I have anything against garbage truck drivers & if that is your kid’s calling in life then go for it, but if you want your kids to be garbage collectors, pay them to take out the trash. If you want them to be leaders, pay them to read leadership books & expose them to leadership opportunities.” Just a thought?

What values are you wanting to instil in your kids at the moment? Thus, what materials are you sourcing for them to read?

All these books are available by clicking on http://www.bookdepository.com/?a_aid=raisingworld