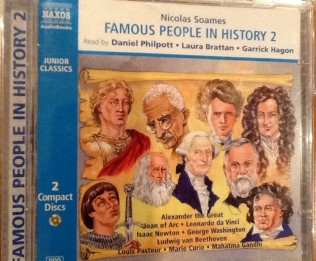 Great CD Series: Matey (8) and hubby drove six hours last Thursday for some business hubby needed to do. Hubby convinced Matey to go with him and Matey was quite content to sit in the car for that time listening to six CD’s on “Famous People in History”, “Great Explorers” and “Famous Inventors and their Inventions” as part of the Junior Classics Series by Nicolas Soames. If you drive any distance with your kids, and want an interesting way to learn some history, these CD’s that we bought from www.bookdepository.com are ideal. Matey’s favourite piece is where Archimedes jumps out of the bath and runs naked down the street screaming “Eureka, Eureka” after discovering that he could determine the volume of something by the mass of water it displaced.

‘Broadway in a Week’ Musical: Princess (10) landed a role (actually two separate characters) in the musical “Broadway in a Week” that is put on by a local church, Gateway Family Church. During the first week of the April school holidays, the kids attend an intensive eight hours per day, five day rehearsal and musical preparation to be able to put on the production by the Friday and Saturday nights. Princess is absolutely thrilled and she has a copy of the Peter Pan musical script and CD and is busy reciting lines and learning the songs. This is the first time she has ever attempted anything like this, including the audition, and is loving it. The musical will be a huge stretch for her but she is taking the preparation seriously already and is loving learning her parts.

“I am Significant”: Matey came home from Church on Sunday deeply impacted from what they did with his age group. His group in the Children’s Ministry looked at “I am significant.” The memory verse was extremely significant for Matey as it impacted him greatly and he keeps refering back to it. Jeremiah 1:5 talks about being created to be significant and to be a voice to the nations. Matey believes with all his heart that this is what he was created to be and do. It gave him so much confidence and I have noticed a change and depth to his prayers since then. Our role as parents is to nurture what has already begun taking root in his life.

We have begun using Apologia Science Astronomy books for this semester for science. I have been delighted at the ease of use of them. We do a chapter per week and the experiments are fun, although our balloon portrayal of the sun and the planets was a dismal failure. Matey managed to get 10 different coloured balloons all of roughly correct sizes to portray the sun and different planets but the stringing together of them at the correct distance didn’t occur before many were burst.

We are all learning new things. Last week was learning about the solar system memorising the order of the planets by making up a mnemonic. This week we have looked at colour waves and why something is the colour it is. We are waiting for a sunny day to melt some chocolate using a magnifying glass.

The Apologia Astronomy book is so much easier than the Apologia Human Body book we began last year. The information contained in that was at a far greater level, what I covered when I did year 11 & 12 biology. For primary aged kids, it was a huge load of work that put us all off science and learning about the human body.

Family get togethers: This has been a huge week of having other families over for meals and spending time with them. (Thus the delay in getting this blogpost of weekly highlights out. Sorry.) Thankfully we have a number of great families with similar belief systems and whose kids and ours get along really well. It makes things so much easier. When you don’t have extended family close by, it is great to be able to enjoy other families inputing into your life and you into theirs. Our greatest need at the moment is to pace our life a bit better as I tend to re-energise by myself. Having five days in a row when we have had families over for a meal and a major part of the day, plus nursing two whole shifts in there as well, has the potential to leave me exhausted. Thus, this next week will be more low key and restful.