48 HOP: One of our family’s favourite activities at church is the annual 48HOP (48 hours of prayer). It is a time of creativity when the auditorium is set up in prayer stations to facilitate times of creative expression with God. Sean Feucht was the guest musician this year who led the corporate worship sessions in times of simplicity, fun, joy and worship.

There were stations for drawing with crayons and charcoals, soaking areas where you could lie down and just let the quiet music relax you and meditate on the goodness of God. There were also 3 mirrors for looking in and declaring God’s intentions over you, a door to walk through, an area to leave your rubbish at the foot of the cross, and a book where you could write encouraging words to people in the community who were struggling with life issues. There was also a huge bowl with rolled up strips of paper in it. You selected one and opened it and there was something encouraging or a Bible verse written on it. Matey and Princess loved this and were always amazed at the accuracy of the words they pulled out. There was a place where you could help yourself to communion as well, another huge favourite of Matey’s as he feels so close to God when taking communion. It is one of the ways he feels he can express his love to God. 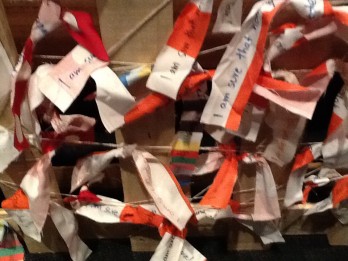 There  were also a couple of times set aside specifically for families to come together and creatively pray ‘machine gun’ or rapid fire prayers ie one sentence maximum prayers. This involved the three different memory verses which the Children’s Church had been focussing on lately. The first one being “I am sure that nothing can separate us from the love of God”. For this activity, we wrote people’s names in the blank place on strips of cloth where there were already words written “I am sure that nothing can separate…….. from the love of God.” The kids (and adults) really got into this. Once written on, these strips of cloth were then tied to string on a wooden pallet. Once tied, it was deemed ‘inseparable’.

Another activity was done with the view of Jeremiah 1:5 in mind. “I am your creator, and before you were born, I chose you to speak for me to the nations”. This has become Matey’s favourite verse and his life verse. We chose a nation and then prayer bombed it with dropping a wet cotton ball on to a plastic world map. This was so much fun. We also did a similar thing with a large world map that we put glue on and sprinkled glitter over the nations that we felt God was speaking to us about. This was also a huge success with everyone having such fun.

We also had a huge plastic blow up beach ball that had the world map printed on it and we threw it around to each other. When we caught it, wherever our hands lay, we prayed for that area. Then we tried hugging it like God would hug the world.

Our family had set apart two full days to spend there and the atmosphere was amazing. Musicians played for the whole of the 48 hours, leading quiet or corporate worship sessions. The evening sessions were a time of live worship with Sean Feucht leading them and they were amazing. After the Friday night worship session, Matey (8) declared Sean his 2nd favourite rock star!

Due to us living 45 minutes away from church, we stayed close by in a motel so that we could maximise the time we spent at 48 HOP. I encourage you to make the most of special times like this, not only for yourself, but also for your kids. The growth and understanding they come away with is fantastic.

Scienceworks: As we needed to be in the city for doctors appointments late Tuesday, we spent the day in the city at Scienceworks. It never ceases to amaze me how kids love “playing” house and “work”. Matey spent absolutely ages in the ‘Nitty Gritty’ City stacking foam blocks and then posting them through a hole in the wall and collecting them in a wheelbarrow to push the barrow around the corner and start again.

Towards the end, they spotted the space area with Princess’ (10) favourite section being the ‘transporter’ and being able to trick people. Matey then found the automobile design area and designed over 20 cars which he delighted in seeing up on the large screen in 3D.

I love how the kids are always learning, even when it is not a formal learning environment.

The exciting news at the Doctor’s appointment was that Princess now no longer needs the extremely painful penicillin injections when we travel to Cambodia and Vietnam in July. When we were in Mozambique 3 years ago, she became quite sick with a disease that required monthly injections until she turned 21 years of age. Thankfully, she had been able to have that reduced this last year to tablets twice a day but with the proviso of going on injections when travelling to aboriginal areas or third world countries. This specialist absolutely shocked us in a great way by changing that advice (he writes the protocol for Australia in regard to this disease), so Princess was greatly relieved.

Swimming: Matey had swimming race night on Sunday evening and was named “Swimmer of the Meet” after obtaining 4 PB’s (personal best) results. He now feels as though he can conquer the swimming world! Matey’s self confidence is improving heaps as he discovers new things that he is good at.

I hope that you and your family had a great week. The year is going by so fast. It is nearly school holidays again here in Victoria, Australia and it is easy to just coast along, getting caught up in the weekly happenings and forget about the big picture. How is your family going in regard to this?