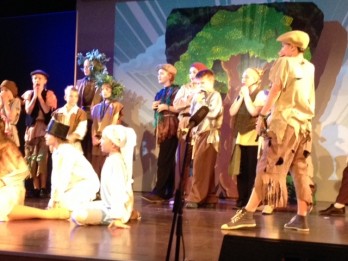 Broadway in  a week: This was a huge week for our Princess (10). She had a role in the musical production of Peter Pan. Put on by Gateway Family Church, they call it “Broadway in a Week” because basically it comes together in one week of the school holidays. The children all auditioned about 2 months ago and then were notified of their parts and received their lines and songs to learn. Princess was Hop, the leader of the Lost Boys. We were thrilled with the way she learnt her lines. (It was practised so much that Matey & I also knew them off by heart!!)

Monday morning they turned up for rehearsals 8.45am – 4.30pm every day for the week. The first performance was on Friday night, with two more performances on Saturday. Seeing the rehearsal Thursday afternoon, I seriously doubted their ability to pull it off successfully. I did know though, that Gateway Family Church has, as one of their values, excellence, so I knew the producers would somehow make it happen. Another value is fun so, along with their amazing ability to create community, Princess had an amazing week. Marcy Paynter and Monica Toussaint intentionally created a wonderful community atmosphere along with  teaching the cast of 42 children aged 9-17 years a fantastic range of stage craft skills. The finished production was brilliant.

Princess was extremely touched that several families with whom she is friends, came to see the production. This meant a lot to her, that they would care enough to come to see her. Sometimes I forget what it is like to be young. It was also a huge event for Princess as only five years ago, she was too shy to even go on stage for her ballet end of year concert. She has come a long way in developing confidence. 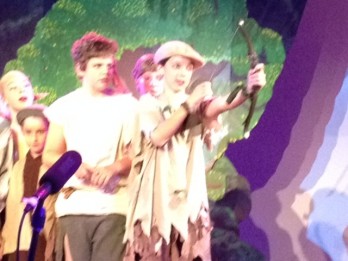 Monday evening I was thrilled as, when we arrived home, I set to work to immediately cook dinner and Princess just automatically wiped up the dishes for me without being asked, along with bringing in the washing from the line, even though it was evident she was extremely tired. We had chatted with Princess that, although this was a really important week for the production, she still had responsibilities at home and also had to be careful of her emotions as we don’t tolerate moodiness. We were thrilled at how every evening she would take herself off very early to bed to get to sleep.

I find that if we outline our expectations before the event, then the children are more aware of their reactions and it tends to work out a lot better. I discovered this worked very well when the children were toddlers and that it still works extremely well nowadays. I find the times we haven’t outlined our expectations and we are extremely busy and it is an emotionally charged event, like a birthday party for Mister 8, is when we come unstuck!!

Parents of children aged 9-17 years of age who live in Melbourne, Australia. Take note, Gateway Family Church in Seaford run the ‘Broadway in  a Week’ production every April school holidays for a week. It is a fantastic experience of healthy community, teamwork, gaining friendships and learning theatre/stage craft. They are going to be running Saturday afternoon workshops a few times this year as well to help skill up the children, so I will keep you informed. It is a great opportunity for your children to have fun and learn new skills. 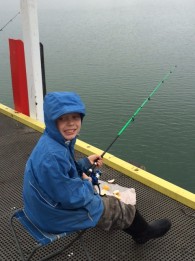 Fishing: Hubby and Matey went camping for two nights during the week, except they ended up staying in cabins as it didn’t stop raining. Matey just wanted to go fishing, so they fished, and fished and fished. Nothing was caught. Matey was thrilled with the experience though. It was also an opportunity for hubby to intentionally explain some more of the “facts of life” to him as they drove and sat. This is really important that he hears his dad talk about his growth physically, sexually and relationally and not just from his mum. Also, I don’t want him to hear it first from his mates. We want to lay down a healthy foundation.

Good Friday / Asylum Seekers Prayer Vigil: This Friday, being Good Friday, UNOH (Urban Neighbourhoods of Hope) are running a prayer vigil on the steps of St Paul’s Cathedral in Melbourne. We are gathering on the steps of the church in Swanston Street (corner of Flinders Street) from 4-6pm to have a peaceful time of praying for the asylum seekers and a just response to their plight. We will be wearing blue as a sign of peace and identity as a group.

Australia has signed the United Nations treaty about how we, as a country, will respond to children to Detention Centres (of which Australia is now doing the opposite) and Australia also has a stance on asylum seekers, but is it what God would want us to do. In raising my world changers, I want them to know and have an understanding of world justice issues. This is a start for me in relation to looking at asylum seekers and what our family’s response should be.

Several weeks ago, hubby went along to an evening where friends at church are running a “Teaching Conversational English to Refugees” series of classes. We are looking at how we can be involved as a family on a regular basis and what that will look like.

Celebrating the Messianic Passover: I have never celebrated a Passover before but this Thursday evening, our family is going to celebrate the Messianic Passover with a simple ceremony at home. I googled it and found an easy one for families. (http://jenniferdukeslee.com/a-messianic-passover-seder-for-families-with-children/  There are more applicable ones on the internet for families with preschoolers, but I thought this one was appropriate for our family (children 10 & 8 years old) and for our children’s understanding of biblical events. It is interactive with different family members speaking different parts. I will let you know next week how it went. I am hoping it will help us all in our understanding and significance of Easter.

Wishing you and your family a fantastic experience this Easter as you celebrate.