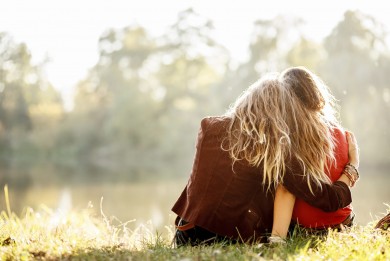 I just had a huge wake up call. Friday night 9pm. Princess (14) reminding me of the plans for tomorrow – her and I to get up early and go first thing to the shops, ‘Cotton On’ specifically, so as to buy her some jeans. I winced twice, firstly because this was our first Saturday home for ages and I had plans of cleaning up, a long walk on the beach spending time with God, and reading a good book after tackling a couple of jobs around the house I had been putting off doing etc. My second wince was at the thought of seeing her in the brand new tight torn jeans and the comments that would follow as I would try to persuade her that they were not appropriate for best. I knew though that she had just saved up money for these jeans from looking after a neighbour’s dog and that she could spend some of that money on those jeans. I rashly said, “What about daddy going with you. Wouldn’t that be better?” Princess immediately said no and came into the room where I was and stated rather forcefully – “Mum, you should take this opportunity now and come with me because in 12 months time I will go shopping with my friends and I won’t want to go with you. You should be thankful that I still want to go shopping with you as most of my friends go shopping with their friends even now. Besides, dad will just say you can’t get them until your mum sees them.”

I took the rebuke for what it was and affirmed that I would go with her in the morning. Princess had been asking for a couple of weeks and I had suggested Saturday so it was a sharp reminder to me that I needed to keep my word. Secondly, and more importantly, Princess was right. She wanted me to shop with her. She was choosing me to spend that time with. She wanted me to go with her. She really did still value my opinion. Since I home school the kids, it is easy to get into the habit of believing that I spend a good amount of quality time with the kids. Princess wanted some focused time with me, not doing schoolwork but buying jeans.

Saturday morning, we were both up early and at the shops when they opened. Surprisingly, hardly any other shoppers were around at that time so we were in and out of several shops as we had the full attention of the shop assistants and no one else in the change rooms. Princess bought two pairs of ‘ripped’ jeans and they look great and feel great (apparently having a tear at the knees makes them so much more comfortable and easy to bend). There was also no need for any comments about rips in the jeans as she explained where she would wear the jeans and I could see that they really did look great on her. Plus, I didn’t want to let the issue of some tears in jeans to become a point of tension. After all, they are just jeans, not character issues. We then had time to buy a drink and enjoy some unhurried time together debriefing life in general. I actually enjoyed the shopping time and at the end of that Saturday, I realised that I had managed to do everything that I had planned initially to achieve that day, plus enjoy some shopping with my beautiful daughter.

Lesson learnt. I need to let my children see that I enjoy being with them doing the things they enjoy doing.

Parents, please value the time you currently have with your kids. They grow up so fast. What you input into them now sows the foundation for the relationship you will have with them later in life.

2 thoughts on “Wake up call”