Saturday week ago was a really enjoyable day when I spent extended time with Matey (9). It was a memorable day. Sometimes when you have little kids, you can easily lose track of the big picture and become focussed on all the things wrong with your child, instead of celebrating the great things. This year, we have seen a maturity develop in Matey (9) and thoroughly enjoy seeing the ‘gold’ in his personality being expressed.

The first person to come for healing was a middle aged man who had had an accident and damaged a limb. He had on his sheet that he struggled with a lot of emotional issues as well, particularly anger. Matey saw a picture from God of God touching this man’s limb and healing it totally. Usually in our church’s Healing Rooms, the kids will draw a picture on a sheet of paper of what they see or hear from God and then give it to the person. Matey opted to just whisper it to me after trying to draw it several times and it not working out as it was taking too long. He prayed for the man’s limb and told the man what he saw God doing. This man became quite excited. After some more prayer about other issues, I really felt to ask him if he had ever accepted Christ to be his Lord and Saviour. Yes, when he was little but he had turned away from God for many years. I asked if he wanted to recommit his life to Christ and he said yes. Matey became very excited. Matey realises the significance of someone becoming a Christian and it affecting not only their life here on earth but their future after they die. I counted it a real privilege for Matey to be present whilst this man recommitted his life to Christ. It is so important for our kids to witness us leading people to Christ and modelling how it is done.

The next several ladies all suffered with depression and other issues and Matey shared with them how he saw them walking from darkness to light with Jesus beside them also as light guiding the way. The next few hours passed quickly as we saw a number of healings occur. I count it a real joy to be able to minister alongside my child and model praying for people.

After Healing Rooms finished, we dropped Princess off at a friend’s house for a sleep over. Matey had a brief play with the younger brother before we drove into the city to visit an organisation that works with homeless people. I love being in the car with just one child as the stuff they share and talk about is priceless. Having an older, competent, talkative sister around can mean that Matey doesn’t always get an opportunity to shine. I let Matey dictate the conversation and choose the radio station to listen to classical music – his favourite.

Once in the city, Matey shined. He has a true gift of serving and was amazing at helping me. We had two huge garbage bags filled with 120 brand new socks, mainly explorer socks. We found the venue and introduced ourselves to the staff. Youth Projects is an organisation that works with homeless people, even having nurses who go out at night to where homeless people sleep and give them medication, treat their wounds, hand out toiletries, socks and water etc. At the beginning of July, Matey set up a project called ‘2 Pairs Each’. (Please see his website http://2pairseach.com.au and his Facebook page – 2 Pairs Each). In July, he collected over 325 pairs of brand new socks to give away to the homeless. We have given them out to the homeless in St. Kilda and Frankston. We were going on holidays this last week so we wanted to give them out to somewhere who could distribute the last 120 of them whilst it was still winter and not have them sit at home for a couple of weeks not keeping people’s feet warm. This project will be ongoing and is just beginning so it was great to find out also about Youth Projects.

The staff introduced Matey to a homeless man. Matey was excellent at eye contact with this man and greeting him with hello and a big smile. The man didn’t want his photo taken as he has a dream of being a famous musician and doesn’t want people to know that he was once homeless. Matey is learning so much about people and about homelessness.

After visiting St. Kilda one evening and helping give out food and socks to homeless folk, Matey has no trouble at all seeing them as normal human beings who are just struggling a bit with life and need a hand. He chats away with them normally.

The CEO then came and took Matey and I for a tour of their centre, explaining some more stuff about homelessness that was really educational. She then took us out to the laneway and bought us a milkshake at the drinks only cafe they have set up to help train homeless folk in the hospitality industry. 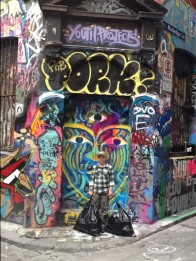 Matey then wanted to spend some time taking photos of the graffiti in the laneway which is famous for having 2,500 tourists daily down it to view the graffiti. We had not had time for lunch and it was now after 4pm. Matey was happy foregoing finding somewhere to get something to eat and instead opted to just drive the hour home and have an early dinner, bath and watch a movie.

The conversation on the drive home was interesting as Matey asked some indepth questions about some issues. Hubby had dinner cooked for when we arrived home and the movie was enjoyable. All in all a great day of connecting at a heart issue, exposing Matey to some key life issues and helping the ‘gold’ in him to shine. A day I will remember when I next realise I am focussing too much on the ‘mud’ and not the ‘gold’.

An addit for people living in Victoria and over 18 years of age. Matey’s project ‘2 Pairs Each’ has been shortlisted as a finalist in the Mornington Peninsula Leader $1,000 grant. This would enable him to buy a lot more socks plus pay for the postage as he wants to write to 1,000 schools to encourage them to hold sock drives to collect socks for the homeless as he realises he can’t do all this himself. You could help him tremendously by going to http://www.leaderlocalgrants.com.au and registering under Mornington Peninsula Leader. You will then be sent an email that you have to click on so as to get your 10 votes to cast. You can give all your votes to 2 Pairs Each. We would really appreciate this as it would be a very cheap way of getting a lot more socks if he wins $1,000 with the most votes. Please also pass on to family and friends and your networks. Thank you so much.