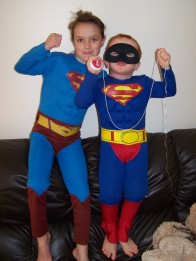 Everyone needs a hero.

This morning whilst bringing Princess home from swimming training at 7.30am, the song playing on the radio was Alesso’s “Heroes” with the words ‘We can do anything. We could be heroes’. How true. We can all be a hero to someone else by the way we live our life and our character traits.

Right from a young age, kids are bombarded with the message about heroes and how heroes can save you in times of distress and trouble. Fairy tales have a hero in them who encounters a challenge and then they emerge from the situation transformed. Kids look up to their dad as a hero and want to be just like their dad when they grow up. How often have you seen a little boy copying his dad in the way he walks and stands?

All of us need heroes in our lives. We need someone or something to look up to, to draw inspiration from when we face difficult life challenges so that we can persevere. Jesus Christ is a hero to most Christians but being a hero doesn’t stop there. Men and women from the Bible or past history, modern day heroes, mentors, teachers, etc.

Matey’s (9) two greatest heroes whom he aspires to be like are David Livingstone (doctor, missionary, explorer, adventurer) and Bear Grylls (army commando, adventure). When he gets older, he wants to be a doctor, a missionary, an army captain and an explorer/adventurer. We have fed this desire by reading books about explorers, missionary doctors and people who have undertaken adventurous lives. We regularly take him on adventurous outings where he is pushed in his abilities. We use his passion for these things when encouraging him about character attributes and dealing with challenges he faces. Great heroes show us how to overcome life’s challenges, persevere and develop character strengths.

Recently Matey and I read a book together that was brilliant at illustrating this. The book, “Alexi’s Secret Mission” by Anita Deyneka fuelled Matey’s passion for sharing God and ministering to people even if it meant choosing between God and his own desires. The back cover of the book reads “Because they were Christians, they were exiled, deported from their home in Leningrad to the cold wasteland of Siberia. But Alexi, his sister Tanya, and their parents soon discovered that even here Christianity survived. If he renounced his faith, Alexi could be a hero, a star on his school’s hockey team. It wasn’t fair! Why couldn’t he be a Christian and a hockey star? Alexi soon discovered a far more thrilling mission. He could become a secret hero, a true Christian soldier, freeing men’s minds from the tyranny of atheistic Communism, with the help of the Bible and faith”.

Reading that introduction to the book, I knew this would be a fascinating read for us both. I had chosen this book because I realised Matey needed to learn about having to sacrifice what he wanted to do so that his relationship with Christ could go deeper and in a few years would need to refer back to a story like this. (I love inputting into my kids real life faith stories so that when they are older, they can later look back and relate to the principles learned from these faith stories.) I also knew that Matey has a desire to go to various countries around the world to share about God. This book gripped us both and we abandoned schoolwork for the day to read it.

Books are a great way to inspire our children and ‘give’ them heroes to aspire towards copying.

As a family we love chatting about various heroes and their strengths, character traits, the obstacles they have overcome, who helped them and how they were transformed. I realise that one of my roles as a parent is to help them find great heroes to admire. I can do this through the books they read, the movies they watch, the people they are introduced to. I also realise that if I don’t help them with this, they will choose their own heroes who moral standards may not be what I would like them to absorb into their life. It is easy to aspire to be like your hero. I want my children aspiring to be like great heroes. I want my children to be world changers!!

How do you inspire your children using heroes?

2 thoughts on “We all need heroes”