We have had an amazing time. Flexibility is the key as plans change constantly. This is fine over here but if it was back home I think it would be frustrating. As we are not living a normal life here with daily school, daily chores and life in general, it doesn’t matter what gets done and what doesn’t.

Culture shock is very real. We spent 3 months in Mozambique 3 years ago so had some idea of third world conditions. Adapting to it however always presents challenges. The tiredness, and for me, the ability to suddenly cry easily, is something I hadn’t really registered. Also, it takes time to build relationships. The younger kids at the centre are wanting attention and human contact with cuddles etc. The older kids appear self-sufficient and are obviously guarding their emotions from having a group of people come for a few days and then go again, most likely to never see them again. 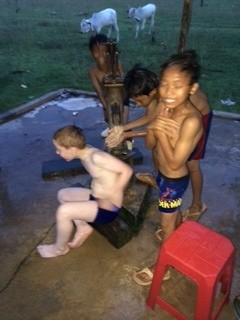 Hopefully having had a few days back with flushing toilets where we don’t have to stand in an inch of water when we go to the toilet and then collect our toilet paper in a plastic bag and some personal space where we can chill, will help us for the next five days, and not have the opposite effect. Please don’t get me wrong. We have loved it. It is just so different to back home.

Princess (11) has probably found it a bit harder than Matey (8). Matey has been waking up at 5.30am, running to have toilet, getting dressed and then hopping on a bike to play with the other kids. He is on the go from first thing in the morning to late at night. Princess has been very tired. She is also quieter at first and just wanted to sleep. I think the culture shock hit her harder. She has also struggled a bit with the food as she has some food intolerances. She also re-energises on her own by reading.

Taking her out to a local restaurant for pizza and just having 2 hours with her, the translator and me was what she needed on day 3. After that, she perked right up.

Being sensitive to their needs is hard and means putting your own needs last. Something called ‘Kingdom living’, or basically, being a parent!! Matey has also needed time out, usually by snuggling up and being read to. Knowing your kids, and realising when things aren’t quite right for them when they can’t tell you or even begin to explain it or understand it for themself, is so important.