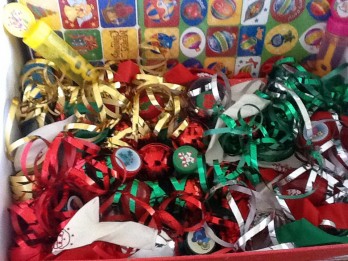 Christmas preparations have begun. Every year I have tried to do a daily advent devotion with the kids and we never seem to finish it before Christmas. We tend to have very busy weekends so we don’t usually do it on those days, then we get behind. Thus, I am trying to be super organised this year and we started it this week so as to get a number of days into it before December even starts. We are using both the “Jesse tree” format and the “Truth in the tinsel”  (www.truthinthetinsel.com). I even found a site (www.EducatingLaytons.com ) where a mum has a son who made Lego ornaments to match the daily devotions from “Truth in the tinsel”. I gave the kids a choice this week and Matey (7) chose to make a Lego ornament instead of the craft, whereas Princess (10) stuck with the craft.

I have also made a Christmas sensory box up for the kids to play with with bubble blowing stuff, Christmas crafts and stamps, stickers, dot-to-dots, Christmas decorations to make etc. It will be interesting to see how much they use it over the coming weeks. 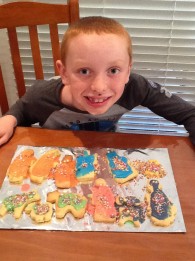 Sunday night was a fantastic night at Messy Church for Matey and I. Princess had swimming squad race night so Matey and I went to the local church’s craft and activity and Christmas meal for kids aged up to 13. It is only a fairly small gathering but Matey thoroughly enjoys it. The craft tends to be messy, the Christmas story was a real hoot as the kids tried to find the right sticker for the right part in the story and the meal was fantastic. Normally the kids help prepare and cook the meal but it was more of a formal cooked Christmas dinner put on for us by some older folk at the church. A highlight was getting the parts of the nativity story made in shortbread and decorating them with icing and sprinkles and then eating them of course!

Personality & learning differences: I have found it a challenging week with Matey and his behaviour and choices. Matey is impetuous and spontaneous. I am organised and planned. Matey is a ‘feeler’. I am a ‘thinker’. It has been a great wake up reminder call for me on how I react and allow him to ‘push my buttons’ and my resultant behaviour. On reflection, his behaviour has escalated since he received the cockatiel. Interestingly, even though he loves the birds when we visit friends, he didn’t immediately bond with his own bird. Granted, he had never wanted a 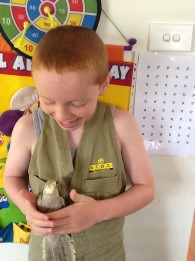 bird. He actually wanted a goldfish. Very different to care for. The bird is very messy and noisy and Matey has found it hard adjusting. Almost like a new addition to the family. It wasn’t until Friday when hubby and Princess spent most of the day driving around Inner Melbourne collecting books from private schools for the ‘Books 4 Cambodia’ project that Matey actually spent any significant time with his bird. He had it out of the cage and showed him all the sights, even taking him for a car ride when we shifted the car just so that the bird could ‘experience what a moving car is like’.

On Saturday afternoon, friends called in to drop some books off for the Books 4 Cambodia project (we are now at over 8,000 books sorted and packed). They ended up staying for dinner and we ended up asking their advice on dealing with kids like Matey. Their kids are now grown up and had their challenges along the way. This couple had some fantastic and invaluable insights of how I could adjust my daily schedule and teaching style to suit Matey, rather than trying to get Matey to suit my style, which obviously isn’t working.

Dentist: In one of Matey’s time of not being obedient in helping, he was skateboarding in our court and fell off, fracturing /chipping the middle part off of his front adult tooth. From our experience twelve months ago when his front teeth smashed on another boy’s head when playing and his two front adult teeth became loose, we knew to ring the dentist immediately. Thankfully we have a great dental clinic attached to our local hospital, it even giving free treatment for kid’s emergencies. They slotted us in as long as we went straight there and Matey received a temporary filling on the front tooth, with another appointment in six weeks for a permanent filling.

Matey has tried hard and one of his gifts is helping. Acts of service is one of his love languages after physical touch and verbal affirmation. This week when I was flat out packing books, he made me a curried egg sandwich and coffee for lunch – totally unexpected but very delicious. I was impressed with his presentation and knowing how much curry to put in etc. Kids watch and take in far more than we think!

If you could do anything at all: During the week, I asked the kids the question, “What is one thing that you would do if you could do anything in the world and money was no object?”. Princess immediately shared how she would have a large house and open it every Christmas for poor people and lonely people to come for Christmas lunch. Matey said that he would give out food to disaster victims. This is causing us to look at what we will do over the next couple of months. Three years ago we helped out at a local Christmas meal for 250 folk who had nowhere to go for Christmas lunch. Matey and I absolutely loved it whereas Princess and hubby also enjoyed it but expressed a wish for the usual extended family Christmas lunch the following year. Thus, we are currently trying to process how we as a family celebrate Christmas this year.

In the Bible in Romans 12:2a, it says, “Do not be conformed to the patterns of this world but be transformed by the renewing of your mind.” Whilst I was pregnant with Princess, our eldest, God really impressed it on my mind that this was a life verse for me to apply to my life throughout the rest of my life. It has helped me process a lot of decisions when it would have been easy to just follow the crowd and society but which God showed me wasn’t, at this stage, for our family. An example of this would be our decision to not send our children through the traditional schooling system but to homeschool them for the time being.

Careers advice: During this week, Matey met with a careers advisor. I wouldn’t normally think of taking a seven year old boy to see a careers advisor, but the lady suggested that I might find it helpful to know some great questions to ask. It was a valuable time for me to see what is great to do with him at this age when he wants to do just about any career possible. One of the best things I can do at the moment is to broaden his mind even further with what is out there that you can do for a career in the future. For further ideas 0n what you can do with your kids, I encourage you to look at the blog post from during the week.

Connecting: Two other significant times this week for our family included time spent Friday night with a family that we have seen around at church and had brief conversations with but had never connected indepth with before. We all had the best time together Friday night. I love it when every family member connects with someone in the other family. This family have fantastic kids who are confident and have great leadership skills. I love asking parents of “stand out” kids about how they are raising their kids. I love to glean insights to help me in my parenting, and thus ultimately help my children to be all they can be.

Prophetic ministry: The other significant time was the time we spent at Hope Church Melbourne on Sunday morning when our Children’s Pastor went to speak at their church and asked some kids to go along with her to prophesy and illustrate what she was saying. Both kids loved the service and the time spent connecting with the folk at that church. When you can input into other people’s lives, it is so special.

Coming up: Apart from last year, the previous seven years we have organised and run a Christmas street party for the people who live in the 50+ houses in our street. We were far too busy last December and didn’t have any spare time of a weekend. There were a lot of complaints last year that we didn’t run it but interestingly enough, no-one else volunteered to do it.  This year we really feel to run it again and the invitations are all printed off and the kids have delivered them.