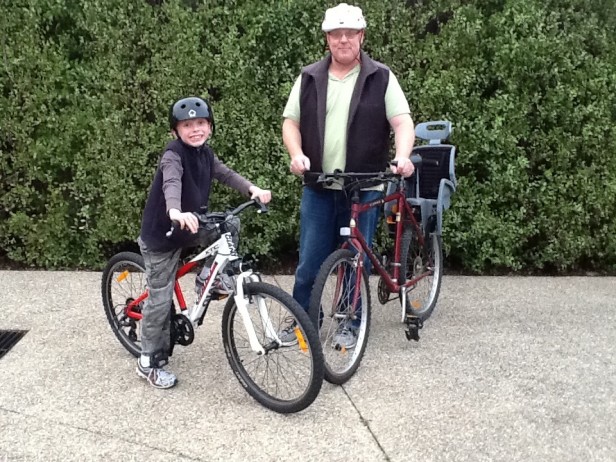 Our family’s bike riding has continued with Matey now being able to join the triathlon team. Hubby helped him fit a water bottle carrier on to his bike and they continued their bike rides together, exploring the surrounding area.

This week has been the last week of the school term here in Victoria, Australia. Combined with the fact that it rained continuously for several days, the kids had a fantastic time creating a town & a story with their Lego and mega blocks. I love how they use their imagination. I believe it is so important to not shut down our imagination and creative ability. I also believe though, that exposing them to movies that show the dark side of life, especially too early, gives them someone else’s pictures of what the dark side looks like and that is not helpful. God created them with an imagination and I believe our role, as parents, is to encourage that but also protect it.

Our whole family is involved with our Church’s Healing Rooms. This is a fantastic way of discipling your kids in the supernatural. They are experiencing first hand God healing people and also giving prophetic words to people (speaking encouragement and helping to unlock the gold in the other person’s life). Our kids have had prophetic words spoken over their lives by world renown prophets about their prophetic gifting and healing gifting. As parents, we have a responsibility to steward those giftings ie we need to help our kids develop in these gifts. We can’t just expect them to wake up at 18 years of age & be mature in how they use these gifts and also the effectiveness of these gifts. Thus, if your child has a prophetic word spoken over their life of being able to heal people supernaturally, what better way than to start by becoming involved in your local church’s healing rooms. There is an atmosphere of grace. They are free to learn and make mistakes. We are all on a journey.

It was quite funny for me to watch my kids on Saturday morning at the Healing Rooms. The 10 team leaders were asked to go out the front (hubby & I are both team leaders). The kids, of which that day there were only my 2 (aged 10 & 7) plus one other girl of about 9 years of age, were asked to select a team leader to go with. The other girl & Matey had no trouble at all virtually running to the people they wanted to be with. Matey chose hubby instead of me so that was great for a change. Princess was stuck. She wanted to go with a certain girl (aged in her 20’s) she looks up to but that girl wasn’t a team leader. The overall leader then arranged Princess to go with this girl & another woman a slight bit older. These two women of God were amazing & so encouraging with her. It never ceases to amaze me how kids will always find people a little bit older to look up to, to have as mentors. As a parent, I want to help place appropriate mentors in my kids’ lives, not to force them to have them as mentors, but so that they are there to speak into my kids’ lives if appropriate. These two women had a huge impact Saturday on my daughter as they formed a trio of praying for people for healing. Princess needs to know and see that there are trendy, attractive, young women who are full on for God and love modelling the supernatural come to earth in seeing people be transformed by physical and emotional healing. A huge thank you to these two women. You help me so much in my role as a parent.

We were able to witness God do some incredible stuff on Saturday. We were also able to practice hearing God on the journey to church by not only asking God what sort of conditions He wanted to specifically heal that day, but also by asking God more questions like what condition and the name of the person with the condition. Our family came up with 18 names of people and the specific conditions that those people would be healed of. That was a real step of faith for our family as it is more specific. God is not only working in the lives of the people who come for healing but in our own lives and increasing our faith level by what we see and experience each time.

I had two days not teaching the kids this week as Monday was spent catching up with a friend whom I pray for plus also another friend’s birthday party. Friday I spent with a group of women teaching them how to hear God’s voice. These women have all had a tough life, making choices that weren’t the best and then having to pay the consequences. I had a fantastic time with these women. They are so real and honest. Thus, the kids had to go to work with hubby for the day. Matey absolutely loved it as he is with the big guys. Hubby employs several guys and they are so good with Matey when he is around. They do big garden clean ups and Matey loves getting in and helping, although often he can be in the way a bit. Princess will help a bit but usually takes schoolwork or books to read. Friday morning whilst doing schoolwork, she was listening to the radio & ended up ringing up for a competition and winning a family pass to the Royal Melbourne Show. Our family has never been to the show so we are now all planning on going the second week of the holidays. Last week she entered a competition on the radio & won 22 blocks of Cadbury chocolate. She spent time this week working out who to give them all away to. It has been interesting to see who she chose & why. Several of my friends were recipients as they have been so good to Princess in the past and she wanted to thank them in this way.