The week started with us back in the swing of homeschooling. Monday we also had afternoon tea with a couple who have just returned from 4 weeks in the U.K. It was a great time of hearing about their experiences and seeing their photos.

Hubby went and heard a guy share about being a missionary in Cambodia for 19 years. Apparently one of the greatest needs in Cambodia is for English books and trained staff. Many educated professionals were killed and books burnt when Pol Pot was in power and the nation is still suffering. Steve commented how most of us would have more books on our living room

bookshelf than schools, universities or libraries would have in Cambodia. Universities have been built in Cambodia with libraries and even book shelves built in the libraries, but there are no books on the shelves. That got us thinking. Princess (aged 10) spent most of the next morning researching the cost of buying a shipping container, buying book boxes, & seeing how many books you could fit into a 20 foot container & whether or not it would be viable. Approximately 17,000 books could fit in one. They are apparently desperate for second hand university & high school text book plus children’s books. Is this do-able? Princess & I have been reading the book “Do Hard Things” by Alex & Brett Harris. Is this one of those hard things?

Hubby and I also had a 3 day conference at our church that we were involved in. For 2 of those days, we spent 5 hours per day involved in a prophetic presbytery giving words of encouragement, edification and comfort to people who had booked in to receive prophetic words. We operated in teams of two to four people. We love this ministry and it is a real highlight. The kids have been involved in the prophetic ministry at church before (they are both actually quite prophetic) but since it was during school hours, no kids were involved this time. Instead, they went to hubby’s parents place during that time. Having talked with them about good use of time, Matey in particular packed his bag with games, books, writing journal. He had great intentions. Unfortunately, once he arrived and the television was on, his good intentions were quickly forgotten.

I have been impressed with Princess there last few weeks. When she was younger, she was very adventurous but has become a bit complacent lately. I noticed on holidays that she was trying new foods and flavours and this was a huge step for her. Also, on Saturday morning she contacted her friend who is involved in triathlons and Princess found out the information and wanted to go too. Thankfully they are giving the swim in the ocean a miss at the moment as it is winter and too cold in the sea, but they are continuing the bike riding and running. Unfortunately Princess’s friend was sick, so she didn’t go but we now have penciled it in in next week’s diary.

It was interesting in relation to chores this week. During the holidays, we had chatted about an increased expectation of the kids to help around the house. Their personalities were displayed this week during the chore time. I showed them both how to fill up the iron with water and how to iron hankies. Princess promptly ironed a hankie but the iron spurted steam out which was at face level and it frightened her. I had forgotten to lower the ironing table as I have it very high. Matey was asking to have a go and Princess decided that he could do the ironing and she would pick up another job. Matey had listened very well to the instructions and was able to follow them more thoroughly than Princess. The next morning at 6am, Matey came to our bedroom and, on seeing me awake, asked me to fill the iron with water for him as he wanted to iron his singlet and T-shirt.

I must say that I was pleased with how they tackled the chore chart and weeded the front garden, swept, cleaned the bathrooms and toilets and did the washing and wiping up without grumbling. A great start to increased responsibility.

Hubby and I have been trying to go for a walk each morning. The kids have decided to join us by riding their bikes. Great way to start the day. Matey is trying new manoeuvres with his bike and this seems to satiisfy his desire for a bit of adventure. Both kids have developed in their road sense with riding their bikes on the road.

Matey commenced a sequential organisational and decoding program with a behavioural optometrist this week. The program goes for 12 weeks. He has 6 visits to this optometrist and we then spend two lots of fifteen minutes each day doing the exercises with him. So far, he has intensely disliked it but we have seen some improvement. This morning in the car on the way to church, we were testing each other with remembering sets of numbers. Already Matey has improved from being only able to remember three numbers in a sequence to four numbers in a sequence. He also came home from gymnastics the other night with a certificate for excellent concentration, so that is an improvement. We see that this program can help all the family improve so we are all doing the exercises but only daily not twice daily like Matey. To do everyone twice daily adds a huge workload to an already full life. We have paired up though to help each other with this. 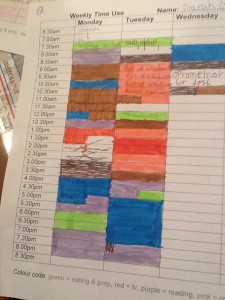 We individually tracked each family members use of time this week, colour coding our time sheet for ease of use. Due to the conference, it wasn’t an accurate weekly use of time, but it did highlight to the kids especially where our time “goes to”. Both kids are involved in a lot of activities & even the travel to and from these activities takes times. Singing, dancing, swimming, gymnastics, soccer, basketball and kids club all takes up a lot of our “after school” time.

The Bible DVD series has been shown on television the last number of weeks here in Australia. It has been shown at 9.30 at night for an hour, so it has been too late for our kids to see. Princess then found out that you could watch the episodes on the computer after they had been shown on the television. Due to being on holidays, we were quite behind in watching them, so this week the kids watched a number of the episodes. They didn’t like the crucifixion scene as it was quite graphic but they both loved the rest.