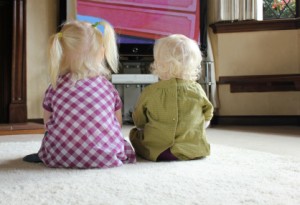 Watching television is considered a normal part of our culture now days. Just because it is a cultural norm though, doesn’t mean that it is right for you. Everyone needs to make their own choice on what is best for their family.

If you value something, then you don’t usually consider that a waste of time. I value reading good books, so when I see my kids reading, I automatically think they are making good use of their time. I don’t value television, so I almost always consider this a poor choice and usually a waste of time. Granted, there are a lot of great educational programs that are helpful to watch, but there are also a lot of programs that I believe are not healthy to watch. You may well say, “well we just use tv to chill out in front of. To have a break.” Television & all of its messages that are portrayed is not a healthy choice in my opinion to just sit down and chill out in front of. There will be stuff that you are watching that you take on board, whether knowingly or unknowingly. Values portrayed on tv programs are not necessarily the values I want my children to incorporate into their own lives.

I must also confess that I grew up in a family without a television. Mum and Dad bought a tv the day that Princess Diana married Prince Charles so that mum, who was a royalist, could watch the wedding. I was in grade ten at high school. So I was used to not having a television to just sit down and chill out in front of.

My husband on the other hand, can remember his family having a television early on and his knowledge of all those old tv programs is amazing. Interestingly, his family never played games together & reading wasn’t strongly encouraged.

In our third year of marriage, we were extremely busy. We were both working full time and studying a half load. Hubby was a minister in the local church and I was a minister’s wife, filling in whenever a position needed filling, plus helping run the youth ministry. We were living at the time in a double storey house, so I placed the television under the stairs. It was such a hassle to get it out and set it up that we hardly ever used it that year. When I look back on what we did achieve that year – ministry, work and educational wise – it was phenomenal.

When our kids were small, I was determined to not allow them to watch much television at all. They were allowed to watch play school of an afternoon whilst I prepared the dinner. That was it. Gradually though, I realised the tv was getting turned on a lot more. I also realised that my son, aged nearly five, was not good at concentrating. A friend asked how much tv he watched. It was about ten hours per week. There may have been no connection between the two, but I was determined to see if no television made a difference.

I announced from that Friday morning, there was to be no television for one week. My son found it hard, especially as he had become used to getting up of a weekend and turning on the tv whilst we were still in bed. The following Friday, Matey was excited as he realised he could turn the tv back on. By this stage, I had seen no noticeable difference during the week, other than the kids had probably fought more as they had nothing to distract them. From another room, I heard Matey tell Princess it was Friday and the tv could go back on. I will never forget Princess’s words, “No, we are keeping tv off until Christmas.” Matey was devastated as Christmas was still three weeks away. I let Princess sort it out with him and he just accepted what his older sister dictated.

After the following week, hubby was the one who noticed the difference and was utterly amazed. We realised that Matey, who was a great sleeper anyway, sleeping eleven hours per night, was actually sleeping an extra hour every night. Matey’s concentration improved enormously. You could see the noticeable difference and other people began asking what the secret was. Both of the kids abilities to make up games and stories with their toys and their imaginative play skills also greatly increased.

Thus, Christmas came and went and the tv remained off. The hardest adjustment was for hubby who had tended to use it to chill out in front of.

One thought on “Television Use”