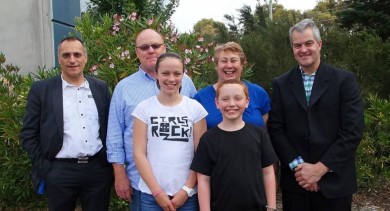 What lengths would you go to to enable your child to meet their real-life, modern day hero?

Four years ago I wrote this blog post. Next Sunday, Matey’s hero back then, Dr Klaus-Dieter John, is coming once again to Melbourne. Hubby and I have had the privilege of organising a full week for him speaking at groups, schools, radio stations etc. Please try and bring your family to hear him speak next Sunday 25th August 2pm at Stairway Church.

“Last night, this thought came to me. My 9 year old son Matey had heard on the radio that Dr Klaus-Dieter John was being interviewed on the radio that evening at 7pm. This was my son’s real-life, modern day hero. I say that because Nate Saint, Jim Elliot, David Livingston are also his heroes but are dead. This man is alive today and still experiencing miracles.

After the radio interview, it mentioned that he was in Melbourne this week. Despite trawling the internet, we couldn’t get any details of where he was in Victoria. We came across the fact that a couple (Chris & Sandi Welch) with 8 children from Sydney were going to live in Peru next year to volunteer for 3 years at the hospital that Dr Klaus-Dieter John built in the Andes Mountain for the poor peasants and has seen over 350,000 patients treated since 2003 when the hospital was built. This man was going to be a radio engineer there since they wanted to broadcast radio programs and advertise which specialist doctors were at the hospital when so as to save people walking for 4 days to get to the hospital if the specialist they were needing to see wasn’t there then.

I was prepared for hubby and son to travel to Sydney next weekend for my son to meet this German Doctor face to face if necessary. He was my son’s hero. Matey has talked numerous times about one day wanting to go to visit that hospital and perhaps we could be missionaries there. What would it take, when this man was in Australia and so near but still seemingly so far away, to get my son to meet him? Would it impact my son and make a difference to his life?

Earlier this year, my son managed to meet Loren Cunningham, the founder of YWAM, and that was also a highlight. We had read a book about Loren and that had also impacted Matey. Was that enough? Should I just give up and let that be good enough. The books we had read about Loren Cunningham and Klaus Dieter John were all part of the “YWAM Christian Heroes Then and Now” series by Janet and Geoff Benge. I highly recommend them!!

Hubby rang the Sydney couple at 8.30pm last night (Sunday night) to see what he could find out. Sandi Welch gave hubby all the details necessary and confirmed that Klaus Dieter John could even come personally to our house if need be. We decided on organising a bigger meeting to allow more people the opportunity to meet him and hear his amazing story of miracle, after miracle, after miracle.

Thankfully, my son gets to meet his hero with just a few phone calls on our part!!”

This next Sunday August 25th  from 2pm – 3.30 pm at Stairway Church in Rooks Road, Nunawading (Auditorium 2 – enter via Eastwing / back entrance), we are holding a meeting for everyone to come and hear Klaus’s story and ask questions. Please feel free to invite as many people as you like. Especially consider bringing your children – they need to hear inspiring real-life stories like this, that can impact their future greatly and help them dream bigger dreams for their life.

FYI: Chris & Sandi Welch and their 8 children did indeed go to Peru for three years and helped set up the radio station and radio transmitters so that over 800,000 people in Peru can now receive Diospi Suyana FM Radio and hear the Gospel along with Christian music and medical information, in both Spanish and Quechua. Diospi’s radio program can also be received via satellite in all of Latin America, by some 400 million Spanish speaking people direct to their homes if they have satellite access. Chris & Sandi and their children are currently back in Sydney raising funds to return for another three years to improve the reach of the radio network.