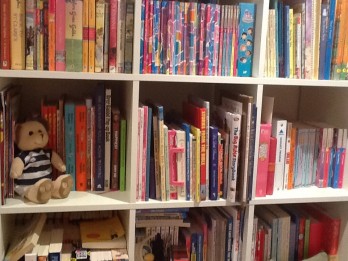 I have realised that I am passionate about reading and achildren learning to read. I believe that one of the greatest gifts that we can give a child is the ability to read. My children literally have thousands of books. They love reading and hate parting with books. I will never forget the occasion I walked into a friend’s 3 & 2 year old daughters bedroom and looked around. There was no bookshelf but a huge cupboard with heaps of toys in it. I had given this friend books for each of her children and she proudly opened the cupboard door and showed me the sum total of all their books. If you excluded the 6 books I had given to her children, there were only 2 other books. This friend did not value books and reading like I do.

As a parent, I see part of my role is always making sure that my children have the next level of books ready to read. I realise that one of the ways that I can influence their character, their imagination, their vocabulary, their future, is by supplying them with books that encourage and inspire them to great heights. If I am raising children who are, and are going to be, world changers, then I need to watch what I feed their minds with.

I believe in the power of reading great and inspiring biographies/autobiographies. The best series we have found for our kids is the “YWAM Christian Heroes Then and Now” series by Janet & Geoff Benge. They are brilliant, inspiring, and well worth the money. Our kids have a great understanding about most of the international mission groups throughout the world and the things the founders went through at the beginning of their journey. We have most of the set which also includes the “YWAM Heroes of History”. I cannot recommend these books highly enough.

I am listing a suggested reading list of books for girls and boys aged 7-8 years and also 9-10 years. This is a “suggested” list only as it is what my children have loved at that age. Every child is different. I have an adventure mad son who loves adventure, mystery and suspense. The ages are also approximate as some children read fluently earlier than others. Princess (11) was reading “Little House on the Prairie” in Prep, basically self taught, whilst Matey (8) is really only now reading fluently in grade 2 after a lot of time and effort put in from me. Let me stress again, these are the books that mychildren have loved and their favourites in their own bookcases. They have read a lot more, but these are their all time favourites.

The ages are only approximate as every child’s reading fluency and emotional ability is different. Plus, even though I have separated them into boys and girls, my Princess has read just about every book listed on the boy’s lists. She devours books and loves the adventure as well. Likewise, one of Matey’s all time favourites is “Amelia Bedelia”. He has read a number of the books I have listed under the girl’s section. Thus, the books can usually be suited to both genders. Princess has read this list over, added more suggestions and wanted me to really stress that she loves all the books I’ve put on the boys list as well.

I have marked certain books with **. This means that they are definitely Christian reading.

Feel free to post comments at the end of the blog on what your children enjoy reading.

I have sourced most of my books from Koorong or Word for the Christian books, op-shops, libraries, scholastic on special or bookdepository. If you click on the http://www.bookdepository.com/?a_aid=raisingworld   link, it will take you there and any purchase you make gives me a small commission (ie~5%). Thanks. Also, if you google www.booko.com.au it will give you the cheapest place in the world, including postage, to buy the book from and have it delivered to your home.

3 thoughts on “My Suggestions for Children’s books ages 7-10.”