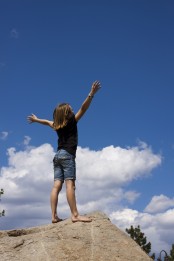 Princess (12) is on an amazing ride this year with opportunities that are opening up for her. Since being awarded the Shire Young Citizen of the Year, she has had the opportunity to speak at least a dozen times, with an exposure to over several thousand people at these events. She has also had afternoon tea with the Prime Minister, Mr Tony Abbott and given him a prophetic picture and prophetic word. During a family devotional time at the beginning of the year where we were asking God some questions and listening to Him speak to us, Princess felt that God was going to open up opportunities for her to speak to people from all over the world. (Mind you, Princess doesn’t enjoy speaking and it is amazing to see her speaking in front of people now when 6 years ago she refused to go on stage in the end of year dance concert because she didn’t want people looking at her.) Since Princess had heard this from God, we then prayed into it and asked God to open up those opportunities and we started declaring this. She has now spoken at three citizenship ceremonies where 400 people from numerous countries have been in attendance. She has been asked to give a ‘TED’ like talk later this month to several hundred senior high school students just prior to a YWAM International Statesman speaks at YWAM GoFest.

What has this got to do with Praying BIG? This was something that started with Princess hearing from God and we then started praying into it. I would never have thought to pray for her to speak and share her story to so many people and have huge opportunities of speaking in front of some of the world’s influential people. What are the possibilities if we asked God what big prayer should we be praying and declaring for our children for this year?

Another big prayer came about on the weekend that I would never have thought to pray but it will have huge consequences. In a passing conversation, a friend said that her son had fallen off his bike and needed emergency surgery. This friend is an amazing prayer warrior and has gifts in healing and prophesy. I said that I gathered she had prayed off the ‘spirit of shock and trauma’ off her son’s body and also prayed off the negative effects of anaesthesia. She asked what I meant. I explained that we can be affected by the spirit of shock and trauma when we have an accident or something traumatic occurs to our body. Picture ourself made up of three parts – physical body, soul and spirit. When a car hits our body, it not only injures the physical body, but also injures our soul and our spirit. Once the physical body has been healed, the spirit and soul still need to be healed from that incident. This is as easy as forgiving anyone for the cause of the accident, maybe even ourself, and then asking God to lift off the spirit of shock and trauma.

Whilst under anaesthetic, our physical body and soul are not in charge of our body. The anaesthetist is. Thus, anything negative that the anaesthetist is into has an opportunity to come through him/her on to ourselves. When both my children have had tonsils out etc, I have simply prayed this off and asked God to cleanse anything from them during that time when they were under anaesthesia and someone else was in charge of their body.

My friend then shared how her husband is an anaesthetist and how perhaps it could work in the opposite way. If her husband intentionally prayed for folk to encounter God and imparted Godly stuff into them whilst he had then under anaesthesia, then imagine what could happen. We both became very excited about the possibilities.

This friend then shared how years ago, her husband, a friend and her had met weekly as health professionals to pray that God would bring them influential clients, not for the money but for the opportunity to speak into their lives. One of the group was a dentist and this person used the time to ask God what to say to the person who was receiving a dental filling or having teeth out and she would give them godly advice about important decisions they were facing. My friend also shared how one of the group is now invited into the King’s palace regularly and asked for advice. I am sure this is the result from all the prayer times when they faithfully gathered weekly over a number of years.

When I stop to reflect on this, my mind just marvels at what could be. What could happen if we prayed BIG prayers for our children, for ourselves, for our work environment? What prayers do you need to start praying this week?

I encourage you to take a few moments, either by yourself or with your family, put on some quiet worship music and just ask God to show or tell you what BIG prayers you could start praying for yourself and your family. Ask God to literally ‘blow you out of the water’ with these prayers that He fills your mind with. Then go ahead, write them down and declare them out aloud.