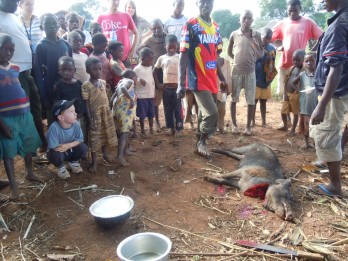 Where suitable and possible, I love taking my kids with me as I minister with folk. When they were younger, I occasionally would lament that my mum had died and I didn’t have anyone to help me with the kids when hubby was working so I had to have the kids with me. I quickly realised that I needed to change my attitude and see it as a positive. Thus, I learnt to enjoy taking my kids with me. I soon realised that they were being exposed to stuff that kids wouldn’t normally be exposed to but that it was important for their development and future ministry. There is no junior Holy Spirit. God can use my kids as much, if not more, than He can use me. A lot depends upon my attitude.

Recently we had the privilege of visiting the Coroner’s Court morgue to pray for a lady who had died. The purpose was to see God raise her back to life. She didn’t come back to life but that didn’t dampen our enthusiasm. In fact, we really didn’t even question afterwards why she didn’t. We realised that she must now be enjoying dancing with Jesus in Heaven and that was better than coming back here to earth. In making the decision to go, I realised that there was limited opportunity for the kids to be babysat during this time but more importantly I realised the importance of them actually being there too, thus they came.  I gave them the option of either coming in to pray with the lady or sitting in the waiting room and reading a book. Matey wanted to come in, Princess chose the book. I didn’t realise beforehand that Princess would end up sitting less than 2 metres from the body in the same room. It didn’t seem to phase her. She just sat and read, watched and listened. How often do kids get to experience this? It was not going to scar them in a negative way.

I heard of a family recently who went on beach mission with their kids. The kids were all fully engaged in the experience and loved it. Being involved as a family is a  fantastic growth and memory building opportunity whilst installing a sense of love for others.

There are, of course, appropriate times and situations where it is not good to have them with you. I was briefly involved in a ministry where I went into brothels to befriend the women in them and to try and communicate to these ladies that they were significant and valued. I didn’t take the kids with me. It wasn’t appropriate. I found at the time that even though I really loved this ministry, I was too involved in ministry and needed to give something up to create some space in our life. Unfortunately I had to sacrifice this ministry, partly because it was very hard with the kids and what to do with them those days.

Just a word of caution, if you plan on taking your kids with you, please check first with the ministry co-ordinator that it is appropriate. That is not only polite, but the person in charge quite possibly knows stuff about the situation that you are not aware of. Sometimes it is just for adults and the presence of kids for the other people present, may mean it is not as good.

Yesterday we had lunch with friends who live in Mozambique. They have four young kids. The mum was sharing how she will never forget the first time they went to a remote village in the north of Mozambique. Her young son was with her as she prayed for this old lady who couldn’t walk. Jesus did something to this lady and next thing she was walking. The mum said how the boy’s eyes nearly popped out of his head as he kept saying “Mum, she can walk!” The mum was sharing how that boy will never forget that incident and how it has already enlarged that boy’s concept of God and what He is capable of doing.

Six weeks ago this family were travelling with a large convoy of army trucks when they were suddenly caught in gunfire and shot at for at least half an hour. The mum was sharing how there was this amazing peace in the car. The seven year old daughter explained that she felt an angel sitting on her head deflecting the bullets. The eight year old boy (the person most likely to be scared of something within that family) then remembered a vision he had had the night before when he was suddenly awakened by a brilliant white light in the back of the truck where he was sleeping. An angel said to him, “No matter what happens tomorrow, don’t be afraid as I will be with you.” The army officers couldn’t believe no-one was injured. The mum then shared how the safest place to be in the whole world is in the middle of God’s will for you ie where God wants you to be.

I can remember another missionary family coming to our home one night to share as we hosted a get together for them. The mum shared with me how her second child had been born six months prior whilst they were living in this slum in Bangkok. Sewerage flowed past their door, it was really a temporary building of tin, wood, etc. Even though this mum already had a nine year old daughter living there with them, the birth of the baby caused her a lot of anxiety and concern about whether their family should return to live in Australia for the health and safety of their baby. God used her time in Australia to show her that the safest place to be is the one where God wants you to be as out of the four weeks they were here in Australia, the baby was extremely sick and in hospital for three of the weeks with a bug he caught in Australia.

These women weren’t afraid to take their kids with them wherever they went. More importantly, they didn’t consider having the kids with them an inconvenience. It was part of life and growing and learning.

Several years ago we spent a few months in Africa and on our first day in Africa at an orphanage, I glanced across the room and saw Princess (then 8), cuddling a little baby. This baby had AIDS, pneumonia, tuberculosis, etc and was sick. I saw this little baby with snot running down its nose, cough straight into my daughter’s face. I can remember this picture so clearly because I was faced with a choice. Part of me wanted to grab Princess and pull her away and protect her health, and the other part of me was saying, if you stop her now, she will never love the infected again. I knew in that instant, I had already made the choice. Before we even went to Africa, we had made the choice unknowingly that we would love whoever was in our path, even if that put ourselves at risk. Nearly four months later when I was sitting beside Princess back in Australia whilst she was sick in a hospital bed and they were doing every test possible for HIV, malaria, tuberculosis, cancer, leukaemia, etc etc, I knew that it would be o’kay. I knew that the decision that day to allow my daughter to love the “untouchables” and not stop her or put doubts in her mind, was still the right decision.

Our children have prophetic words over their life about having prophetic ministries and healing ministries where they are involved in healing people both medically and supernaturally. With a prophetic word, part of your responsibility is looking at who you have to become so that the word can be fulfilled. I can’t expect at say age eighteen, that they will automatically step into this. They need training and practical experience. That was one of the reasons that we joined the Healing Rooms team as a family. The opportunity was there as they were beginning to introduce the idea of having children on the healing team, so we  jumped in and said yes. Thus, every month they are getting a bit more experience with seeing God heal or not heal people. They are being mentored by other team members as they join with them on their teams. They are always watching and listening, even if some times it doesn’t appear that way. Princess recently showed me all the notes she had taken of all the ‘conditions’ she had prayed for when people requested prayer. Just that in itself is an education.

As you do life this year, are there any opportunities that you have to take your kids along with you? It may not necessarily be for ministry purposes. It may just be living life. Any ministry opportunity that is appropriate, I encourage you to make the most of it and take even one child with you and expose them to something bigger than themselves. I encourage you to take a minute and ponder, even ask God, to show you at least one way you can enlarge your child’s life this year by involving them in ministry with you.