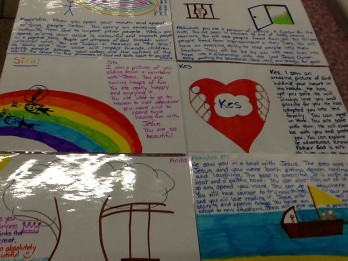 A friend was recently sharing how her daughters came home from school that day and they were in terrible moods. One was upset that she had been left out of the friendship group and was obviously feeling rejected and displaying behaviour that indicated she was hurt. The other was upset at a confrontation she had had with a friend. The mum calmly listened to them and then firmly marched them into their bedroom to look at a canvas on their bedroom wall. On the canvas was written and illustrated a series of prophetic words that had been said over each girl that gave a picture of how God saw them and who they were becoming. The mum asked each daughter to read out aloud what their canvas had written on it about them. The mum then said, “Does this match up with how you are feeling and what happened today?”. Both girls admitted that it didn’t. The mum then said then they had better keep looking at the canvas until they realised how God saw them and who they truly were. The words written about the first girl was that she was a peacemaker and would bring peace and leadership to groups. Similar things were written about the second daughter. Both daughters attitudes quickly changed as they realised they had been believing a lie from actions perpetrated against them that day. 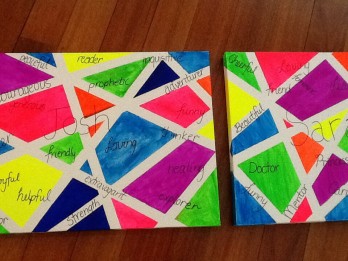 Our children had fun each painting a canvas a few years ago and we then wrote words on them that described that particular child. Words like courageous, generous, thinker, friendly, healer, beautiful, funny, leader, encourager, peaceful, fashionable, inquisitive, adventurer, kind, extravagant etc. These paintings take pride of place on their bedroom walls. I love that as they are settling down for the night, they can be continually reminded as to how God and their parents see them.

One of our children has a prophetic word over them about being a mountain climber in the prophetic. We often talk about this and we are helping him develop in his prophetic ability. We guard what he sees and hears (eg movies, books he reads etc to guard his mind) and we say it in our praying over him of a night and in blessing him. The other child has had a number of prophetic words about healing people in the natural and supernatural. We mention this in a similar way when praying, when blessing her, when training her and when talking about the monthly Healing Rooms team where she has been a member for 4 ½ years etc. We don’t use these as limitations but as beginnings to expand on.

I encourage you this week, help your children start to see themselves as God sees them. It may even be finding verses from the Bible about how God sees them and typing them out and making them into placemats for the dinner table. Be creative in how you can help them see themselves through God’s eyes. The world is screaming at them that they are worthless and insignificant. They need to be able to visually see and repetitively hear how God sees them to help them turn around any faulty image they have of themselves.