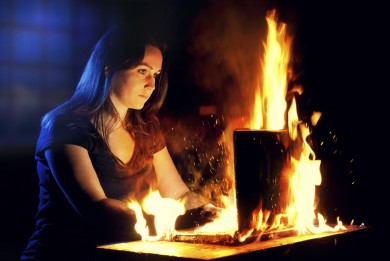 I was first exposed to Halloween ten years ago when I was in an accountability group with other young mums. One mum had older children and I can remember her saying that she was in a dilemma as her eldest son had been invited to a Halloween birthday party and she didn’t wish him to go. I expressed my ignorance, as growing up in country Australia, I had never been exposed to Halloween or what it symbolised. It seemed such an unAustralian thing to do. This sent me on a journey of inquiry and trying to see if I could find a definitive answer in relation to should christians celebrate Halloween. I was aghast at some of the things I discovered, the origins and the implications. Anyone can google and find out this information. There were numerous reports from Pastors in the US who seriously advised against participating in this in any form. They cited serious consequences of church members who had suffered demonic complications with their health, relationships, finances and joy after being involved in what they believed to be an innocent activity. Would we normally allow our children to play with fire? Why then, would we encourage them to participate in Halloween activities? Where do you stop in relation to participating and modelling going along with demonic activities and playing around the edges of something sinister?

That same year, as I was bathing the children early one evening, there was a knock at door. I did the wrong thing leaving the kids in the bath alone to rush to the door. Standing there were a group of kids that asked if I had anything for them. I incredulously asked them what they meant as I had no idea. They replied, “Lollies of course” and I innocently stated, “why would you come and ask me for that?”. They left and I hurriedly returned to my kids in the bath. Only later did it dawn on me that it was Halloween and these kids must have been trick or treating. I think my reputation in regard to Halloween has gone before me and I have only ever had one other year when kids knocked on our door.

Several years ago, neighbours up the road were going trick or treating and my son really wanted to go with them. He kept talking about all the lollies he would get. Apparently these kids knew which houses would give the biggest amount of lollies. I refused to let our kids participate and we talked instead about the consequences of participating and opening up an entry point (or door) to the demonic. Hubby and I at that stage had just been through a few torrid years of dealing with a lot of generational and freemasonary issues and certainly didn’t want to willingly open any doors to the demonic again.  We have chosen instead to not even give recognition to it but have approached the evening in the opposite spirit and had a great time as a family either watching a movie or playing games and having special food and celebrating life with Jesus Christ as our personal Saviour. We openly discuss Halloween and the implications with our children since they are at an age where they can understand the implications.

This year, Matey (10) is in the outback camping with hubby where they will not even register that it is Halloween. Princess (13) has her dance class and then we will be having an early night as we were both up early this morning for swimming squad training. Thus, it will be a non event for our family. Princess did comment to me that she wondered if her swimming coach was a Christian as when team members commented on Halloween, the coach was incredulous that it was an American tradition and had no place in Australia and was extremely vocal that it was all about witches and demonic stuff and why would anyone want anything at all to do with that. With Princess and myself being in bed early, I am planning on setting aside a portion of time to pray specifically over our home, our neighbour’s houses, our streets, the local fire brigade which is hosting a Halloween party etc. I am praying that the light of Christ will shine brightly over this area and cleanse it, that people will come to know Jesus as their own personal Lord and Saviour. In the next week, our family will then plan our neighbourhood evangelism around the Christmas message with Christmas soon coming upon us.

Several years ago, I had a guest blogger (Michelle Willis “Redeeming Halloween: One Family’s Experience” 16th November 2014) write about her experiences of how she participated naively in Halloween as a child and how she wouldn’t let her kids do the same. Instead, she bought lollies and Christian comic magazines and gave them out with a blessing prayer to any kids that knocked on her door. I have heard of other families having parties to celebrate Jesus as the light of the world on this night.

After being involved in prayer ministry for a number of years, I highly recommend that you do not participate in any Halloween activities. I have seen a number of people who have had to deal with a lot of unnecessary negative and demonic issues in their life from naively opening the door to the demonic through activities like this.

Personally I am wanting my kids to have a clean imagination, one that is from God and can see angelic spiritual beings through God’s lenses. I do not want society’s images of any supernatural beings influencing their thought life. I would be very hesitant as a parent if I had young children or children who were highly sensitive to allow them to view some of the ghoulish creatures walking our streets tonight. These images can foster nightmares and bad dreams.

This is not an activity for Christian families to be actively going to a Halloween party to evangelise. Please do not sacrifice your freedom and your children’s freedom in the spirit by unnecessarily opening a doorway for the demonic to enter your family line. If you would like to evangelise, then hold a ‘light of the world’ party in your own home and invite your non Christian friends there, under your terms and without the spiritual implications obtained from the demonic. If you feel that you must go so as to evangelise, then go yourself but don’t involve your children.

Please parents, research Halloween and make an informed decision. Ask God to show you and tell you what you and your family’s response needs to be to Halloween. Whatever you do though, please don’t play with fire.

One thought on “Halloween – are you playing with fire?”