Isn’t this a most exciting time of the year as we look toward the cultural celebration of Jesus’ birth and life. I was having some time pondering with God this morning as I was waiting in the car at 6am for my daughter to finish swimming training. I was reflecting on the fact that every day is really a celebration of Jesus birth and life, just this time of year it is more poignant. It is like the birthday celebrations for our children. We really celebrate their life every day in how we act and think and dream and speak, but on their birthday, we specifically focus on them and celebrate them. How do you celebrate Jesus’ birthday on the 25th December? The Children’s Church leaders were sharing in their meeting yesterday at church about how this is the time of year to thank Jesus, to keep the focus on Jesus. We are going to be away from home in the lead up to Christmas and on the day and I am looking forward to ‘stripping’ Christmas back to the bare essentials and focussing more on it being Jesus’ birth than the normal presents and food to get ready. What about you?

Busy season: Several weeks ago, hubby and I looked at our calendar in the lead up to going interstate to being with my extended family for Christmas. We agreed to try not to put anything else into our already full calendar. Well, we have blown that completely ‘out of the water’. So many fantastic opportunities for connecting with folk have come up that have been special times of sharing and growth and ministry and it has been great to just say yes. Last week, the Kid’s Club at the church around the corner had the parents pull out who were cooking the evening meal for 30 people. Thus, to step in on the day and serve was special and a way of demonstrating thanks to the leader for all she puts in to the kids lives. I have finally realised that it is my attitude above all else. I can complain about all the extra car trips for dance practice or I can be thankful that I can spend that time with my kids and listen to their thoughts and prompt them with great discussion starters.

Life skills: We finish formal schooling at the end of November. Thus, Matey (8) has been at work with hubby doing garden cleanups. Matey & Princess (11) are both responsible for all the weeding at home and do a fabulous job. When Matey helps hubby and his crew, Matey weeds, rakes, stacks the trailer, gets in the way, helps spread mulch and generally finds any insect or reptile in the vicinity. The other day, he found a baby python and was fascinated with it.

Dance Concert: We had our annual dance concert yesterday. A new record was set – it only went for 3 hours instead of the usual 4 hours. We love watching each group perform and the Christmas story that is woven through it. The senior group is stunning in its tap, glee, hip hop, jazz and contemporary presentations. The juniors are cute. The intermediates are great as that is where our kids are and seeing it all come together and their costumes are stunning. Princess again won the tap award for her class. She spent hours practicing and her tap dancing skills improved tremendously over the year. Her improvement in skill and her age has meant she now leaves those friends and goes up a level, which she is so excited about. Matey has been doing tap and Jazz and next year wants to drop tap dance and take up hip hop.

This year was a milestone for me as I danced in the concert this year. I considered this a huge achievement – the weekly dance classes and performing at both the cabaret and the end of year concert. It took me out of my comfort zone and was something that stretched me. I also got to spend time weekly with 8 other ladies whom I wouldn’t normally connect with. We sewed costumes together, danced together, ate together and shared life events and supported each other through several parents dying and other parents going through cancer treatment, operations and several sporting injuries. An amazing experience that culminated in dancing in front of a huge audience.

It was also a great way to show my kids that I am prepared to step out of my comfort zone and try something completely new and be always learning. Enough dance now as times have changed next year and it is no longer practical. What will I try new next year?

Church Christmas Production: The kids are dancing in the church Christmas production this year. Glimpsing some of the rehearsal last Saturday showed it will be stunning. This has meant that the kids have had practice 3 times per week at church. Combined with dress rehearsals for their dance concert, we have had 10 days out of the last 12 with extra dance rehearsals, full dress rehearsals, classes, concerts etc. Thankfully, the end is in sight. As stated earlier, I have learnt this year that my attitude is so important so I am really watching the words that I use in relation to all these dance practices, makeup trials etc and really trying to enjoy the journey.

Street Christmas Party: Our annual street Christmas party was last weekend. We have a small reserve equivalent to several house blocks in our street, so it is a natural place to have the party. It was quite hot but not hot enough that it deterred folk from coming. It was our best turn out in 10 years. The only down fall is that hardly any kids came. Most families had other sporting or family commitments on at that time. Our street has a lot of retired folk living in it and they all turned out. One man whose wife died during the year, brought his bocce balls and Matey had an absolutely fantastic time playing it with him for nearly an hour. This was a special time for them both. It also reinforced several things about Matey and his preferences and giftings to me. 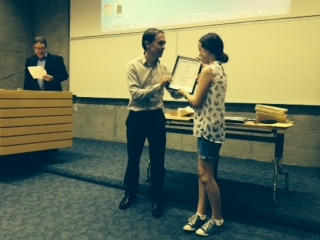 Australian Geography Competition: Princess was invited to the Victorian Geography Teachers Conference last week to accept her award for coming apparently equal first in Australia for the Australian year 8 Geography Competition. (I say apparently because we were initially told that she came second in Victoria and she was sent a magnificent book prize, that Matey absolutely loved, earlier in the year). We turned up to the presentation and apparently we were wrong and she had a better score than initially thought. Another book prize, this time of maps of North Eastern Victoria!! We stayed for the key note speaker of the conference and it was fascinating. Dr David Kennedy from the School of Geography at the University of Melbourne spoke for an hour on “Big Waves”. He kept Matey’s attention the whole time. He covered topics such as tsunamis and which way to run, coastal erosion and how close to build your house near the beach, flooding in Bangladesh and how there are really no solutions for them, coastline changes over time and mapping it, risks, hazards, vulnerability and elements of risk with natural disasters.

Hospital visit: Our family visited a sick relative in the AlfredHospital last week. None of us had been to that hospital before so it was a real eye opener. I also realised that Matey hadn’t been a hospital visitor for the last year and how discussing stuff can help them with life skills and greater understanding of life, sickness, and practicalities. Since The Alfred Hospital is known for its trauma section, Matey was hoping to see someone with amputation of both knees etc but thankfully we avoided that.

Prophetic activities: Our Church Prophetic team’s last training night for the year was a time of celebration. The kids and I enjoyed preparing for it. We did a number of creative and fun activations to help people think quickly. We modelled it on a birthday party (since Jesus’ birthday is coming up) and played ‘pass the parcel’ with a difference. Every layer had a small gift – an item you would use everyday. As people opened that layer, they had to ask God who the gift was for and why and as they immediately handed the gift to them, they needed to give them a prophetic word about how it applied to their life. The kids helped me brainstorm other activities as well for the night and it was a huge success with people being encouraged and growing in their prophetic gift.

We had the Almond Tree Ministry Breakup and the kids helped me write a prophetic word for each team member. We also had to individually write a prophetic word and on the night our team leader told us who it was for. Most of them were extremely accurate, apart from Princess’ card with a Princess on the front going to a man. 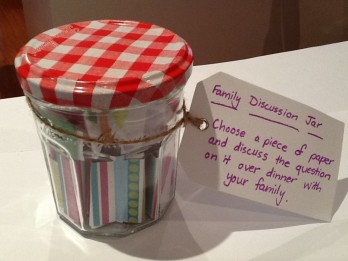 Family Discussion Jars: We like to give thank you gifts we have made to other families at Christmas time and this year we hit upon the idea of ‘Family Discussion Jars’. We wrote out 35 different questions on slips of beautiful paper and then folded them up and put them in a jar. Families are then encouraged to take a slip out when having a meal together and discuss the question written on the paper. The questions/statements were written based around them sharing feelings but also some integrity questions as well. Some sample questions / statements were:

End of year celebration dinner: Every year we go out for a special dinner to celebrate the kids achievements and the end of the school year. They receive a certificate each which lists their major achievements and character areas they have grown in throughout the year. On arriving home, Matey shared how the real reason he wanted to give up gymnastics 12 months ago was that he didn’t feel the teacher encouraged him. He then talked about various teachers Sarah and him have and their different ways of encouraging or not and what he finds helpful. It was a powerful conversation. He was in bed and I was spending a few minutes with him and praying for him and I realised yet again how powerful and impacting and special that time is to just stop and listen. It was also a great reminder to me about how he needs encouragement and how he best responds to what sort of encouragement.

I have been reflecting on the 5 love languages this week. They say that children up to age 7 need all 5 ways of being shown love (words of affirmation, gifts, acts of service, quality time, physical affection/touch). I am coming to think that we may have believed a lie in that I firmly believe as adults even, we need all 5 ways still. I also believe that in our relationship with God, we need to look at how we express the whole 5 ways in our love for God.

How do you encourage your children? How do you celebrate their achievements and their character growth? What is something you can do to encourage each child this week?