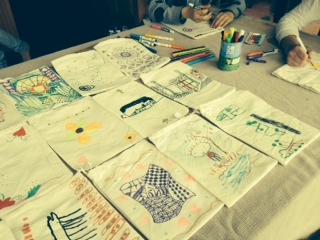 We are finding our calendar is rapidly filling up with dance practices for two separate Christmas concerts and just life as the end of the year is rapidly approaching. Looking back over my diary this last fortnight, nothing newsworthy really stands out. It has a mainly been just ‘living normal life’. I am fast realising that saying “yes” to one sport or concert rehearsal means that we probably need to say “no” to something else and to also look at the effect it will have on the whole family unit.

Swimming: The very first week for years that I have managed to have both kids swimming training sessions at the same time (for 2 out of 3 of Princess’ training sessions) and then Princess surprised everyone by passing the test to go up a swimming squad level to silver squad. Training now involves three 6am swimming starts and one evening. Thus, my delight at the coinciding times was short lived. It has been an interesting experience for Princess as she surprised everyone by swimming extremely fast with correct technique. None of her friends managed to pass and this created an interesting dilemma for her as her swimming is more enjoyable due to the friends she trains with. This has been one of the first times when she has also faced excelling when it was totally unexpected. Most of her friends used to be faster but on the night of assessment, didn’t pass correct technique and the time trials. Thus, there has been some interesting comments that Princess has had to endure and not buckle under. A great learning experience for her. This squad level means that she will also get to compete at state level, so a huge learning curve.

Matey has had a fast learning curve with being one of the youngest in his swimming squad but it is great for him. He has just returned home from season time trials and there is plenty of room for improvement. He has an excellent male coach who so understands how to motivate Matey to get the best out of him.

Cambodian trip reunion: Three months after returning from Cambodia, we managed to get the team of 8 together for a meal at a Cambodian Restaurant in Springvale. It was a great time of reminiscing and reflecting and enjoying Cambodian food, this time without any bug delicacies that Matey so enjoyed trying whilst in Cambodia.

Backpacks and toiletry bags: Princess and Matey had two opportunities this week to assist with packages for kids living in remote Australia and in the PacificIslands. At the local kids club, they packed backpacks with all sorts of school and hygiene supplies. At the local homeschool group, they helped decorate toiletry bags that a grandmother had sewn and which next meeting they will pack with toiletry items and a small toy. I love it when my kids get faced with the realisation that not all other children live like they do.

Meals for neighbours: Several weeks ago we had two new neighbours move in next door and across the road. The kids helped me cook meals for them and we cooked so much that we were able to deliver 4 meals to each family plus a meal to another elderly neighbour. This week has been interesting as both lots of neighbours have come and shared how impacting it has been for them to have someone do something like that. One neighbour who lives alone even shared the meals we gave her with a friend who was just out of hospital after hip surgery. This small act is totally impacting numerous people. I love helping my children realise that they can impact others through everyday events. Australian History Competition: Princess was presented with a medal and portfolio folder at the History Teachers Conference on Friday. It was a special occasion and the only students present were her and a year 10 boy. This boy spoke so fluently about how his experiences in living overseas and chatting with his parents about different countries, their history and just life, had been the best preparation for the exam. Princess floored many teachers present as she is only in grade 5 yet it was the year 8 exam, as well as being homeschooled. The main presenter for the morning session highlighted the emotional side to history and that it is more than just facts and figures.

Whilst in the city for the day, Princess and I also went to the Clinique Department at David Jones and Princess was given a good lesson in skin care routines.

The Bible: This week, I have implemented a daily copy work program into the children’s schooling. They copy as many verses out of the Bible in 30 minutes that they can. They have chosen where they are copying from (Princess chose Acts and Matey chose Proverbs). I am rewarding them with accuracy as they get one cent per word spelt correctly using correct capitalisation and punctuation. If Matey copies over 100 words, he gets an extra dollar. If Princess copies over 200 words, she gets an extra dollar. The kids are loving the rewards and there haven’t been too many complaints. Matey has also chosen to read to me each day from Proverbs instead of reading a reader to me. It has made for interesting discussions. We are still plodding through Matthew’s Gospel reading aloud several chapters per day. Matey is really loving this and is constantly amazed at what Jesus does and says.

Reading: This week we are continuing on with “The Sugar Creek Gang” by Paul Hutchens. Matey really loves it and Princess enjoys it as well. I highly recommend these books. When we first looked at them twelve months ago, we didn’t find it that inspiring. This time around, they are suiting my children well. There are at least 36 books in the series and we are only on book 3!! Princess has also read a biography on Marie Curie this week. Inspiring!!

Future careers: This week, Matey has decided he wants to be a war journalist (or the Manager of a POW camp or have his own missionary organisation in the Pacific Islands and he has even chosen the name for his mission)!! He has started carrying a notebook and pen with him everywhere. We have also increased our use of descriptive words to help him. It has been a long habit that when we drive down ‘Oliver’s Hill’, a steep hill on the main road into Frankston, we always look over to the sea and try to use three words to describe it on that day. Thus, we are trying to use that idea at other times. This morning on the way to church, the atmosphere in our street was described as tranquil, serene and still. The sea was melancholy, morose, sombre and becoming angry.

Healing Rooms: The children were once again involved in our church’s Healing Rooms this last Saturday. I love hearing feedback from the team leaders that the children partner with about how accurate and suitable their words, drawings and prayers were. It is also an encouragement to the children. I was in the other room praying for children, especially those with autism, but also children in general. It was a very emotional time for a lot of parents. I encourage you if you have children that are not developing as you would like or have struggles physically, emotionally or mentally, please chase after their healing. We are seeing some amazing results as parents come back time and time again with their children. One father brings his autistic son each month and has seen amazing progress socially, emotionally, mentally and physically. This son has now far exceeded where the specialists had ever thought this child would get to. At the moment we haven’t seen any instant healings from autism but gradual steps each time. I encourage you parents, chase after both your own and your children’s healings!!

DVD’s: The ‘Little Men’ series (by Louisa May Alcott) was a huge hit this last fortnight. The kids have also watched some history and geography movies about Antartica and Europe. This coming Friday night, the children are wanting a special movie night to celebrate life as we don’t get involved in Halloween activities. We are still to choose the movie but we are finding the two local libraries have had some great movies. Their close friends will all be involved in Halloween activities so we are going to celebrate life as a family with special food and time together. We have chatted a lot about Halloween and the stuff behind it. Focus on the Family Australia have a great resource about Halloween on their web page that you can use to help you and your children understand the background of it. Australia has really embraced this ritual recently and our family is wanting to steer clear of it and the consequences from being involved in it. This morning I was reading that over $33 million US Dollars were spent just on pet Halloween costumes alone last year in the US. This horrifies me, not only spending that money on Halloween related stuff for your pet but imagine what it could be used for in a third world country and how many lives it could save!!

Funeral: Several weeks ago, one of Matey’s Sunday School leaders died very unexpectedly. We went to the funeral to celebrate his life. This was the third funeral in three months. It has been interesting to see how the kids view life and death as part of life and the conversations that come up from this.

I would love to hear from you if there are any topics you would love to have me give some input on. Just drop me a line or comment below in the box. Thanks.