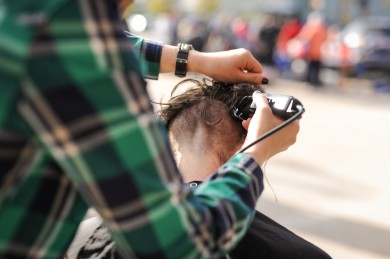 A mum of teenage boys was recently sharing with my daughter and me how her son had turned up at home with a mullet. During the holidays, him and his friend had shaved each other’s head, leaving the latest trend of a thin strip of long hair at the top. This mum then proceeded to tell us how awful it looked and what she had done in response.

Her response had been to ban her recently turned 16 year old from driving the car. (Being 16 in Victoria, Australia means that he can start to learn to drive with an adult in the car beside him.)

My daughter and I glanced at each other but remained quiet. In this instance, that glance spoke a thousand words!! A short while later when my daughter and I were in the car, we again looked at one another and laughed.

It was only a haircut!!

(That was one time when I said to my daughter, “Aren’t you glad that she is not your mother? I’m not that bad after all am I?”.  I must also add that it was my daughter who said that perhaps the mum was acting out of her own embarrassment and feeling shame for not being able to control her son!!)

Learning to drive and accruing driving hours is vitally important to some sixteen year old’s and to use that as punishment for such an unrelated haircut seems totally absurd. This was not a huge misdemeanour that the teenager had committed. He was not in trouble with the police. He had just cut his hair in a manner that his mother didn’t like or approve of.

Parents, please do not sweat the small stuff.

Sure, a haircut to you may mean the world, but is it really? It is only a haircut. Sure, you, and others, have it as a constant reminder whenever you look at that boy (unless he gets the mullet shaved off to go with the rest of the shaved head). But he hasn’t hurt anyone else. He hasn’t damaged someone else’s property. He hasn’t killed anyone or done irreparable damage to something or someone.

Parents, is it worth damaging your relationship with your teenager over a haircut?

Let’s keep things in perspective and keep the relationship as a number one priority.

Some things to keep in mind in regard to handling consequences:

I would love to hear how you handle issues like this with your teenagers. Please feel free to comment below or send me an email.