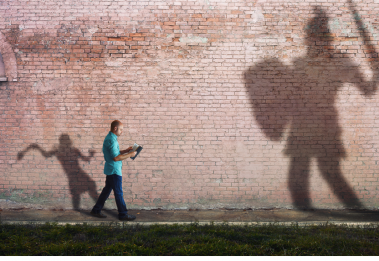 In the Bible, we know David for many things:

Some lesser-known characteristics of David are that of his parenting skills and his relationship with his family. I will first look at the lessons from an overview of David’s life, followed with principles we can learn from David’s parenting skills that we can apply to raising world changers.

You can read about David in 1 Samuel, 2 Samuel, 1 Kings and the Psalms.

David was born in Bethlehem, the youngest of eight sons of Jesse. We do not know who David’s mother was, as there is no mention of her.

During the reign of King Saul, God instructed the prophet Samuel to anoint one of Jesse’s sons as the second King of Israel (1 Samuel 16:1-13). Samuel invites Jesse and his sons to a feast where Samuel will anoint the son that God shows him will be the next King. Jesse turns up at the feast with seven of his eight sons. It appears unusual that they leave the youngest son out, until you realize that David is from a different mother to the other sons, also highlighted because they mention his looks. (When you read unusual phrases in the Bible, it is emphasizing that you need to take notice.) David was rejected and ostracized within the family. (Stressed further in 1 Samuel 17:28 when his older brother stated David was conceited & wicked.) Samuel highlights the fact that there must be someone missing from this momentous occasion and the family hastily sends for David. Samuel identifies that David is to be anointed as the future King.

If you were invited to a significant and unusual event, would you make sure that one family member was left out? Imagine the emotions and the detrimental effect on the relationships between family members.

Lessons from an overview of David’s life:

We can trace adultery and murder down through David’s lineage. He was conceived in adultery. He committed adultery. His son continued the sin. Get prayer ministry to deal with the generational curses within your family line and stop them infiltrating further down the generations.

You cannot afford to be passive and indifferent. David is a classic example of a passive father. He never corrected or disciplined his son for raping his half-sister. Thus, another son Absalom takes matters into his own hands in revenge and kills the perpetrator. When children have clear boundaries, they feel safe and secure. Children need to see you, as a parent, acting just with all the siblings.

Don’t have favourites. “And when king David heard of these things, he was exceedingly grieved: but he would not afflict the spirit of his son Amnon, for he loved him, because he was his firstborn” (2 Sam 13:21). David remained quiet and passive and attributed that to his love for his eldest child. Genuine love includes correct and just discipline. Amnon has seriously sinned against his sister and needed to be held accountable. David remaining quiet and uninvolved meant that he communicated acceptance of what Amnon had done.

Your children will become resentful and bitter if they see you acting unjust or not dealing with issues.

When David fled Saul, he took two of his three wives and left Saul’s daughter Michal behind for many years. Later, David dragged his abandoned wife Michal, who had now married Phatliel, back to his palace and under his control. (2 Samuel 3:13-16). Image was more important than relationship.

David didn’t demonstrate kindness and compassion with his children and wives/concubines but extended these qualities to Jonathan’s disabled son Mephibosheth when traditionally he would have been killed (2 Samuel 9:1-13). Please treat your own family well. Do not extend grace to others when you don’t extend it to your own family.

Raising your kids is important. Be present with your kids. David, as King, was busy. He put the needs of the people before his own family’s needs. It appears David spoiled his children, giving them whatever they wanted (1 Kings 1:6, 2 Samuel 13:21). Was this to make up for the time he spent apart from them?

When David was a young kid in the mountains herding sheep, who would have dreamed that he would become King? God can move and arrange circumstances to enable the seemingly impossible to occur. That doesn’t mean that we don’t work and develop our abilities. David developing his fighting and music skills enabled him to be strategically near King Saul.

In 2 Samuel 6: 20, David came home to be a blessing to his family. What atmosphere do you bring home with you? Would your family say that when you are home, you are a blessing to them?

David enquired of mentors and wise people several times, other times unwise people. The outcome can be disastrous if you listen to unwise people. Being accountable to someone wise means that you are less likely to stray.

In 2 Samuel 12:11 after Nathan confronts David with his sin of adultery, Nathan tells David that ‘someone close to you will sleep with your wives in broad daylight. What you did in secret, the family member will do in broad daylight’. In 2 Samuel 16:21-22, David’s son Absalom slept with David’s concubines in full view of everyone. Repent quickly, but you will still have to deal with the consequences of the sin. Also, be careful of what you say as you sow seeds with the words you speak.

Amnon was idle and had too much time without any purpose. Teenage boys, especially, need activity and purpose; otherwise, they can easily look for mischief.

David’s first wife Michael had a pagan image at home (1 Samuel 19:13) despite David being a ‘man after God’s own heart’. Encourage your family to worship the one true God with you. Be careful what you allow in your household. Once you allow idols in your home, you open an entry point for the demonic to have a legal right.

David danced before the Lord, but his wife Michal criticized and nagged him. Do not allow others to determine how you worship. Select a partner who will not be critical and nag (2 Samuel 6:20). Pray and chat with your children about selecting a life partner.

We all need a proper understanding of sin and a realization that no sin is too great for God to forgive. David sinned by being an adulterer and a murderer, but he repented, and God forgave him.

When David saw Goliath, his perception differed from all the other Israelites. They saw a giant. David saw an opportunity and an enemy that he could defeat. The way we perceive things affects our thoughts, attitude and behaviour. Model and help your children with their perception.

God is a God who forgives and chooses to forget. God’s love and mercy never end. Always keep a close relationship with God. Bring your children up to know and love God and his mercy and love.

I would love to hear your thoughts on David and how the principles from his life apply to us raising world changers.