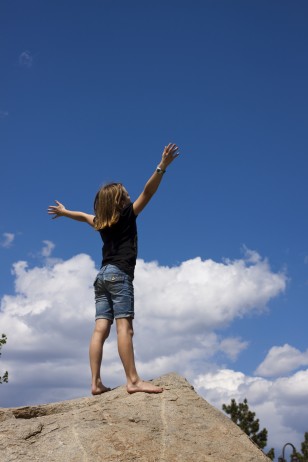 A friend was “glowing” today as she was recounting how her new job was going. She is absolutely loving it as she discovers more and more how perfectly suited to her giftings and personalities this new career path is for her and how God has designed and equipped her. To emphasize the point, she showed me a picture of a T-shirt she had bought prior to obtaining this position. The T-shirt had the following slogan written across the front “Let what you love be what you do!“. This is so true yet how often do we know people, maybe even yourself or your partner, who is in a job or a career that is not fulfilling.

I want more for my kids. I want them to know and understand their giftings and strengths, their passions and personality and what sort of job/career would really suit them, realising that the job in itself is not the priority. Who they are and are becoming is more important than a job/career.  I don’t want to “pidgeon-hole” them and be a controlling mum. I do, however, want to help them have a great understanding of the sort of career path that would really suit them. Back in November 2013, I wrote a blog post about helping your child look at career options after we took our then 10 year old and 7 year old to a career counsellor. (The local library was offering free career counselling to home schoolers so we took the opportunity to investigate and receive some fantastic advice.) Right from 18 months of age, Princess has never wavered on what she wants to do when she leaves school. On top of that, she has had numerous prophetic words that align with that. Please hear me right – we will not force her into this career path if she changes her mind in her later school years but at the moment she is still determined to follow that career path.

Matey, on the other hand, used to change his mind every day depending on what he was looking at at the time – garbage collector, carpenter, scientist, gardener, fork lift operator, cleaner etc. Hubby himself had no idea what he wanted to do when he left school until he went to a careers day event to keep his friend company and was left standing talking to a police officer who suggested that the police force was a good next step after high school, so hubby followed that path even though that wasn’t a true match to his giftings. Hubby, like so many others, really had no idea what his strengths and giftings were and what really matched his personality.

This past year, Matey has narrowed down his options to that of military doctor plus a missionary. It will be really interesting to see what he does end up doing, but at the moment it seems like a great fit. He loves any information about the army, wears army greens/pants every day, reads voraciously about anything military. I do realise that there are a number of years until he really has to make a choice (he is currently only in grade 3) but I really believe that if he has a great understanding of his strengths and giftings, likes and dislikes, personality and capabilities, it will enable him to make a lot more informed choice than just desperately ticking any box for university study.

He has arrived at this option after many conversations about his strengths and abilities, his likes and dislikes. We have always realised that Matey is active and adventurous, loves the outdoors and pushing himself and discovering new things. He also has giftings in the prophetic and supernatural healing. He has many prophetic words about being a “mountain climber” in the prophetic. He would love to climb Mount Everest in the natural. (The other day as we were driving to the shops, he commented to me “I reckon God wouldn’t even need artificial oxygen to help him if he was climbing up Mount Everest.”)

I love ‘feeding’ my children appropriate books that will stimulate their mind and help them in the path they are interested in. This last week, Matey himself has read “Hidden like Anne Frank” and is now reading Jim Eldridge’s book, “Desert Danger” about a soldier in Egypt in World War 2. This last week I have read to him “YWAM: Christian Heroes Then and Now” the Ben Carson book and have started on Klaus-Dieter John. We then watched the DVD “Gifted Hands” about Ben Carson’s life. When Ben was young, his mother used to say he needed to take the “im” out of “impossible” and make it possible. She turned off the television one day and demanded that her 2 boys start reading 2 books per week and write a book report on them. Within a short period of time, Ben went from being the class ‘dummy’ to being the class dux. He then went on to become a world leader in paediatric neurosurgery, becoming famous for separating conjoined twins. Klaus-Dieter John, at age 9, decided he wanted to be a missionary doctor. He grew up without a tv and read a lot. This impacted Matey significantly, especially as he is 9. He read the 211 page book “Hidden like Anne Frank” – his first ever big chapter book and then came and asked for a book report page so he could write up the book report. He suggested that I make up a book report page with the title, author, number of pages, a summary of the book, what he liked and didn’t like about the book, the characters, and the words he didn’t know in the book. He also asked for another 20 blank book report pages because he had already decided on the next 20 books he was going to read. I can’t emphasise enough the value of giving your children powerful books to read.

Since Matey loves adventure and exploring, hubby takes him bush camping a lot. They go exploring and have a great time away doing adventurous stuff. One of Matey’s heroes is Bear Grylls. Matey and hubby have watched numerous videos about him and Matey loves lighting fires in trenches just as Bear Grylls does. For Matey’s 9th birthday, we gave him an expensive pocket knife (multi gadget knife). It was worth it for the look of gratitude on Matey’s face. He literally sat on the floor after he opened it, just looking at the knife, then up at us, then back at the knife for at least 5 mintues and saying “Thank you. This was just what I wanted.” He now carries that knife everywhere with him.

We have also taken the opportunity to introduce Matey to people who currently work in the field he is looking at – military, medicine and missionaries. We have arranged tours of their workplaces. This all helps to enlarge his persepective and give him a realistic view of what that sort of career path could entail.

Where are you at in relation to each of your children and them knowing and undertanding their unique giftings and strengths? How are you helping your children discover their giftings? What books have your children read this last week?

One thought on “Your child’s strengths & future career”