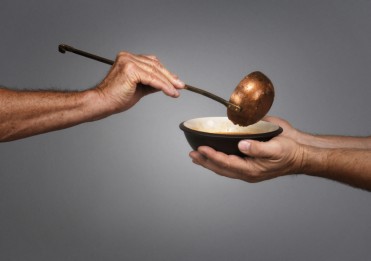 There was a definite change in the atmosphere and the interaction that evening. Princess, aged 8, had instigated attending the weekly meal for people with mental illness and disadvantaged folk. We drove 45 minutes every Wednesday night to help serve the meal and then sit and eat and chat with the folk attending. At least one family with kids would come every week and Princess would sit with those kids and chat and you would always hear them laughing. On the way home, we would debrief what happened and I would explain about the various mental health illnesses that particular folk suffered from. Occasionally we would have to debrief about a fight that had broken out.

On this particular night, the folk were clambering over Princess to congratulate her. Princess had just learnt to make apple crumble and she had decided to bring a large apple crumble that would feed 45 people. These folk were touched. Firstly, the apple crumble tasted great. But more importantly, it had been made by an 8 year old girl.

As I pondered what made the difference that night and why these folk were so excited about Princess making an apple crumble, I realised that they were touched by the fact that she had put a lot of time and effort into something for them. This constituted far more time and effort than just turning up, serving a meal and helping to wash up and clean up. She had spent a good deal of the afternoon making this apple crumble.

Secondly, an apple crumble usually brings back memories of childhood, when things were so different for these folk. This brought up positive memories.

The most important reason, I believe, that these folk were so impacted that evening was that it gave them hope. If a child would go out of her way to do something for them, then the world was in a great place. There was hope for them for the future as there were children coming up behind them who would do something for other people without expecting a reward.

I have also seen this when, as a family, we have given out brand new pairs of socks at a meal on the street for homeless people. We do this with Matey who has started an organisation called ‘2 Pairs Each’ where he has collected and distributed over 18,000 pairs of brand new socks to the homeless in 2 ½ years. Every time I see Matey give out the socks to these folk, they ask him about them. He shares about how he wants to help them and collects socks for them. Often I see these homeless folk’s eyes moisten over as the impact of this hits them. That a child of 9 would do something like that for them. It gives them hope and touches them like nothing else.

Over the last 6 weeks, I have been encouraging you to raise your children to be world changers. To do something to help other people.  But it is not just about ‘doing’ something. It is about ‘being’ as well. The physical doing is important, but the being and the relating to people is so much more vital.

To begin with, it can be scary for some kids to communicate with people so different from themselves. In fact, I like to prep my kids by saying that they are normal human beings that are just in a different circumstance.

To begin with, I encourage them to just answer any questions.

For adults, don’t be afraid of silence. Sometimes on the street with a homeless person, I will ask a question, that I perhaps shouldn’t have asked and it may bring up a painful memory. I don’t try to fill the silence. Usually the person will then start to explain their situation, if they know that you really do care and are really interested in them. These times have often led to the most indepth and fantastic conversation with me that they may never had told many people at all. I usually then ask them if I could pray for them and every time they have allowed me to pray for them and bless them. I love how they always end up with tears in their eyes and, even if they don’t believe in God, their spirit has been touched and blessed.

A great conversation starter at the meal for people with mental illness and disadvantaged folk would not be “Where are you going to go on holidays?” as these folk generally don’t have the luxury of going on holidays. More appropriate questions include:

For kids, some good questions include:

Usually they want to hear about you and your life. The important thing is to be careful not to communicate a lot of stuff that is associated with wealth eg holidays, travel,  etc.

In the process of raising our children to be world changers, we need to prepare them for having conversations with people who are vastly different from them.

We also need to prepare them for the fact that it isn’t always about what you can do for people less fortunate than yourself. It’s also about who you can be for them.

Never forget that the most important thing in all of this is who you, and your children, are becoming in the process.