One of the challenges I find at this time of the year is balancing the end of year activities (such as extra dance rehearsal classes, parties, group and sports breakups for the year as we are in the Southern Hemisphere & the school year finishes before Christmas) & normal life along with getting our hearts focussed on the real meaning of Christmas and being able to really enjoy the process. Each year I tend to want to add extra activities into our Christmas preparation and it is the unfulfilled expectations that cause tension. On top of all that, this year we have our ‘Books 4 Cambodia’ project which is nearing completion. We were aiming at having the container packed and sent by Christmas, but realistically we knew that that would be virtually impossible. Trying to balance driving all over Melbourne picking up books with sorting & packing the nearly 8,000 books which have been in our carport this last fortnight and more coming in daily, along with the drizzling rain has been a challenge. 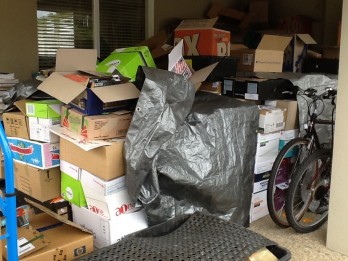 We are thrilled to be at the 12,000 books sorted and packed point with thousands more being sorted and packed this week. We will have all the books before Christmas. We just won’t have them all packed in the container until after Christmas, hopefully early January. This has been a huge effort as it has been largely just the 4 of us. We had no idea of the enormity of this project before we began. The kids have been instrumental in driving it and it has been a huge learning curve, especially for the kids. At this point though, Matey is wanting us to stop the books for awhile so that we can put up our Christmas tree. Totally understandable!!

Another extra activity this last week (just what I needed!!) has been both the kids ringing the local radio station and both getting the opportunity to participate in the singing of the ’12 Days of Christmas’ song to open the digital Christmas radio station over December. They both had to sing a line of the song. So exciting for them being at the radio station at 7am (a 50 minute drive away) and getting to meet their favourite hosts, plus seeing the workings inside a radio station. A fantastic experience for them.

The huge highlight for both kids was the annual dance concert. Both kids do tap and jazz dance and it was great to sit through the whole 3½ hours of concert, plus Princess and I returned to watch the seniors concert an hour later followed by a late night milkshake together.

Princess came with me to our local meal for people in the community who are doing life tough. It was an exciting night to be part of as both the adult prophetic team at church and the grades 2-4 class (ages 8-10) had been involved in drawing pictures for a person they didn’t know. They were each given a sheet of paper with a person’s name on it and asked to draw a picture that God would give them for that person. Whatever came into their head, they were to draw (as long as it was encouraging, edifying and comforting). The results were mindblowing. The pictures were so accurate. Even that day I had been notified that a couple of new guys had turned up to the meal in the previous two weeks. I asked Princess to draw a picture for them both so that they would also have a picture. Only one guy turned up that night but the picture & the explanation that Princess had written was spot on for the guy & he couldn’t believe it was from someone who didn’t know him plus that she was only ten years old. A month ago, we had all sat down as a family & drawn pictures for the remaining group members that the adult team had not had time to draw for. Matey did a picture that was purely brown lines in a mess all over the page. He had wanted me to write “Life is like a jigsaw puzzle. It can look like a mess but Jesus sees the bigger picture and has all the answers.” The picture meant nothing to me but it was so accurate for that person. There were numerous other stories throughout the night of accurate pictures impacting people. The children’s drawings always seem to have so much more impact on people. I encourage you to get your kids drawing pictures for people, strangers etc. It can have a huge impact.

Saturday we had the opportunity to also speak prophetically into the lives of people who struggle with different life issues. The kids were involved with us as well. I encourage you, where appropriate, to take your kids along with you. This isn’t always appropriate, and it is necessary to check with the person running the event first, but it is great for the kids to experience ministry with you. They get to grow dramatically in the process, plus they get to be in on what God is doing, not just getting the spiritual ‘flack’ from what can happen to kids of adults involved in spiritual activities.

I also booked both our children, together with hubby and I, into the Melbourne event for primary aged kids of “The National Young Leaders Day” run by the Halogen Foundation. (www.halogenfoundation.org ) They run leadership days in several different cities to inspire primary and secondary kids in developing strong leadership values. The 2014 event for primary aged kids in Melbourne is the 24th February from 9.15am – 2.30pm at the Melbourne Convention Centre. Cost $44 per child, $20 adult or teacher. It is open to schools plus individuals. Matey (turning 8 at Christmas) is a bit too young, but if he gets one thing out of the day, it is worth it. Exposing and surrounding your kids to other people who have achieved great things is one of the keys to creating a culture of greatness. One of the guest speakers will be John Marsden, the author. Past speakers have included Delta Goodrem, Anh Do, Catriona Rowntree, Bindi Irwin, Jessica Watson, Tim Costello and people who have risen to the top of their field. A great way to inspire your kids for leadership on the way to them changing their world. For those interested, please book soon as it is hugely popular.