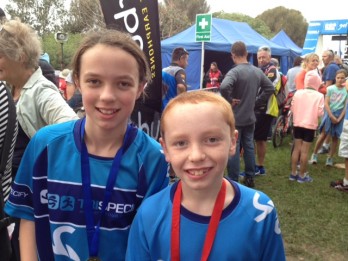 Triathlon: The kids entered their first actual triathlon. They have been training all season, mainly because Princess (10) enjoyed catching up with her friend who did triathlon training at 8am on a Saturday morning. The social aspect was enough to keep Princess at it even though she didn’t really like the running part and wasn’t really passionate about triathlons. Last year, after Matey finished soccer for the season, he joined in since he really loved the bike riding aspect. Plus, it was extremely handy to have both children in the one sport at the same time. Unfortunately we had something else on every time there was a triathlon event, so this was the first and last race for the season. We wanted them to at least experience the thrill of one triathlon before the end of the season.

There is an excitement during a race that you just can’t capture during the training. The training gets boring if you never have the opportunity to actually race. The race is where it all happens but you do need to put in the hard work at training for the race to be successful and to get the most out of it.

Our children’s different personalities came out during the race. Matey is very headstrong (some would call stubborn). He had told us he would do breaststroke during the swim part as that was his favourite stroke. We tried to tell him that freestyle is a lot faster. Matey also asked numerous questions beforehand. He had a question about every aspect of the race. Often, of an evening after going to bed, he would think of a new question about the race. It is the way his brain works and he likes to feel in control of new situations.

During the race, he swam a perfect breaststroke all the way in the water. Unfortunately it slowed him down so he came out of the water fourth last  in that age group. He loves bike riding and made up a considerable amount of time in that leg of the race, finishing well after his run. The training really paid off. Also, they are in the children’s part of  a club that is so supportive and the adult members all cheered the kids on so encouragingly. It was exciting to see the effect on the children.

When Princess was younger, she was extremely competitive but has seemed to lose that as she has grown. This is especially evident with her swimming. Well, she literally blew us out of the water with her race. She was the first swimmer out of the water and had run up the beach and was on the footpath before number two girl exited the water. Princess powered along. Her bike riding leg let her down and she also dislikes running but her running leg was strong and we were amazed at her running ability. She finished well also. It was a great day for them both and a fantastic learning experience for us all.

God moves in unexpected ways: I turned up to the dentist on Thursday for the first of four appointments due to me requiring a root canal and three big fillings. The dentist, who is not a believer, stated that my God had better help me as I really needed it today. As he was starting, he received a phone call that the next patient had cancelled so he was excited that he could do more with me and hopefully prevent one of the booked appointments since I travel  a fair distance to get to him. After two hours and a few choice swear words, and many times exclaiming that ‘X-rays don’t lie’, the dentist was quite excited and proclaimed that my God was certainly with me as something had changed in my mouth and I now no longer needed the root canal. He had managed to do the three big fillings and I would now no longer need to come back for the other appointments. 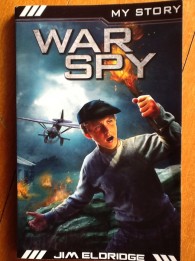 Adventure books for boys: Matey loves being read to. One of the first things he says when he gets up of a morning is “Can you read to me please?” His reading is at a stage where he can read a number of books himself but the harder ones take too long and he loves snuggling up having a book read to him. The latest book is part of the “My Story” collection and is called “War Spy” by Jim Eldridge. It is a fantastic book for 8-12 year old boys. Basically it is about a 14 year old boy in France when the Germans invade during World War 2. His dad gets killed in the fighting and he hates the fact that his uncle, with whom he and his mum live with, seems weak and doesn’t do anything to stop the Germans. Unbeknown to him, his uncle is part of the Resistance Movement and is actively involved in getting British agents in and out of the country. The boy gets himself in a fight with the Nazis, landing in a police cell. He is then recruited, by his uncle, into the French Resistance basically so the uncle can keep an eye on him. He also has to learn Morse Code at one stage.

Matey asked for a nail and the Morse Code written out so he could practice. We have sent each other notes in Morse Code this week. I love the suspense and the excitement from these stories and I firmly believe that they are essential to instil in boys a love for reading and a love for adventure.

I am always on the look out for good books for my children? Can you recommend any? I would love to find some more for both Matey aged 8 and Princess nearly 11 years old. Thank you.