Passover meal: I chose to hold our Passover meal on Wednesday night this year, despite objections from the rest of the family that it wasn’t Thursday, the traditional night for the meal. I had a ‘gut’ feeling that we just needed to. I followed the service from Jennifer Dukes Lee’s website, as written about last week and it was really easy. I cooked roast lamb and added roast vegetables to the meal as our children simply love them and I did wonder if there would be enough in the remainder of the food to be substantial. There was!!

Matey took great delight in setting the table beautifully, using special candles and the best wine glasses. He really got into the spirit of the occasion. Princess was a little hesitant but, after a warning when she was refusing Matey who wanted to wash her feet, she then participated fully.

The meal took an hour and I would definitely leave the lamb roast in the oven until needed, as you don’t eat that until near the end. There were great explanations throughout and it was a good experience that we will definitely repeat again next year. It was great to be able to explain some aspects of Christian heritage that we wouldn’t normally have dealt with.

The foot washing was a highlight. Matey loved serving in this way. Matey has a gift of serving so this was a highlight for him, the other highlight being drinking 4 glasses of special ‘drink’. The outline talked about hand washing but we decided to do foot washing as we felt it was more legitimate. Also, we had experienced recently in our lounge room a father washing his daughter’s feet as we prayed and prophesied over her as she was going through a rough patch. This father had demonstrated amazing love, grace, acceptance, servant hood and a demonstration that he would support his daughter no matter what path she took as he washed his daughter’s feet, something uncommon in our culture.

I encourage you parents to go with your ‘gut’ feeling as on the Thursday morning we received a phone call from a couple who mentor us spiritually. They live overseas in Cambodia but were home for a week, and they asked if they could come for a meal that night. Thankfully, we now had it free and had a fantastic time with these mentors as we gleaned new insights, new resources to aid us in our spiritual growth, several dreams were interpreted and encouragement to do the hard things we were facing.

Asylum Seeker Prayer Vigil: Our family had made a decision to go to the Prayer Vigil on the steps of St Paul’s cathedral in the city to pray for asylum seekers. Our family has not had anything really to do with asylum seekers or refugees, so it was an important first step for us. We had a great two hours praying, singing, learning and participating in an interactive way about the whole issue. At various times, it looked like our children and the other children present were not actively participating (Princess read two books she had been given for her birthday during this time) but Matey certainly was listening and involved with the nailing of his prayer to the cross and writing an encouragement message to tie on the olive tree. Matey had a lot of questions during this time and it was great (challenging) to discuss them. Children don’t tend to accept the status quo but want real answers. Why would we lock asylum seekers up and seemingly throw away the key? 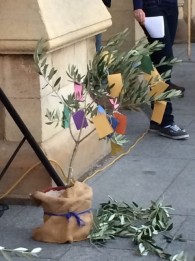 There was a real lament that our ways haven’t changed in 2000 years since Jesus was a refugee in Egypt. It is easier to lock them up than deal with the real issues. We affirmed the humanity of asylum seekers and also the humanity of those who are responsible for their plight in Australia. We also confessed our part of complicity in not addressing the real issues, not standing up for asylum seekers. We then asked, “What does it mean to stand up for them? What would God want us to do?” A great challenge that we came away with was, “Let us not ask how we can stop the boats but let us ask how we can help be a solution to a global problem.”

Good Friday: This year, we chose to attend our local Frankston combined churches production on the foreshore at the beach. Every year they have a fantastic worship service, craft time for the kids and a dramatic presentation of the stations of the cross. We were already there when the decision was made to cancel the event due to the heavy and intense rain and strong winds. Princess was quite impacted by this as she met a number of actors who had learnt lines and practiced but were then not able to play their dramatic part before an audience. Some of these children were cast members in the ‘Broadway in a Week’ which she had participated in the previous week. She really empathised with them. According to our children, this event is a definite must do next year.

Since we now had some spare time, we all went to the cinema to see ‘Mr Peabody and Sherman’.  It was a good film that we all enjoyed.

Birthday Celebration: Princess is turning 11 in a week so during the school holidays, she began her birthday celebrations. She is at a great age where she is fairly self sufficient so she can organise a lot of things on her own. This has been such a help to me but also a great set of skills for her to learn.

Teaching kids that they can’t have everything: Another great life lesson I believe that everyone needs to learn is that we can’t have everything all the time. Princess’ swimming squad has had a swim camp for the last two years. It has been extremely expensive for just one night at which there was no swimming but mainly a social time of getting to know the other swimmers. Princess had already established great friendships within the squad and since the price was exorbitant, we made the decision in consultation with her that it was not a good use of finances. She has been really thrilled with that decision since there has been opportunities since then that she has wanted to participate in (eg Broadway in a Week) that cost money and she can now do since she hasn’t spent it on the swimming camp. She has often referred to that decision as important as she now can do some things she really values.

Learning about Art: Several years ago, before they were packaged nicely and sold, I managed to obtain a free copy of an ebook by www.classicalcomposersmonthly.com. It has 25 different artists along with one of their most famous paintings each and a short biographical sketch. The author has released another of these books, plus also has a monthly newsletter on composers etc. I love her artist A4 format and we use it on a weekly basis. I print a sheet off and put it on the back of the toilet door every week. I am not a huge art fan and don’t know that much about art, but his has been a great introduction to the art world.

My children love reading about the different artists and seeing the different pictures. It is amazing how often it comes out in conversation. Even the other day, when we went to watch “Mr Peabody and Sherman” at the cinema, Matey said at one stage, is that the painting ‘Starry Night’ by Vincent Van Gogh? I was flabbergasted that he remembered. Then during our Passover meal, Princess talked about the picture by Michelangelo depicting the Last Supper.

‘The Scream’ by Edvard Munch was included and it was interesting how no family member liked that picture. I still felt it was important to display it as it broadened their view of what art is. Rene Magritte’s ‘The Son of Man’ with a picture of a man with an apple covering his face, was unpopular also. George Seurat’s ‘A Sunday on La Grande Jatte’ and  Monet’s ‘The Water Lily Pond’ have been popular.

Family DVD’s we have been watching: I am not a fan of television (see previous blog post on ‘Television Use’, September 7th, 2013) and we restrict our children’s viewing. During a normal week, they would normally watch maybe an hour at the most of television.

Over the school holidays, we have been watching some movies together as a family though. ‘Cool Runnings’ is a favourite. My children have watched this several times, especially when the Winter Olympics were recently on. It is a comedy about a group of guys putting together a bob sled team from Jamaica (a hot country where there is no snow) as they want to desperately compete in the Olympics. One of them accidentally tripped the others in the 100m running final competition to select the Jamaican team. They believe that because they are all world class runners, they may have a chance, even though they have never seen snow before.

Another favourite has been ‘The Inn of the Sixth Happiness’. It stars Ingrid Bergman and is based on the life story of Gladys Aylward, a missionary to China. This is an all time favourite of our family. I would definitely recommend this video. (Our children are 10 and 8 years old).

Widening your child’s language expression: when Princess was young, hubby used to ask how could we make sure that our children had a wide usage of the English language. He downloaded an app on his iphone where a new word is sent everyday. Unfortunately, this has been largely ignored. Instead, we have tried to expand our usage of words and have read a lot to the children and encourage them to read widely. This has been the most effective method that we have found. There are times when both hubby and I will look at each other in amazement as Princess especially will come out with a new word or way of describing something using an uncommon word appropriately. I am really open to hearing your suggestions on this as we love to improve.

I hope your Easter was a significant time for your family.