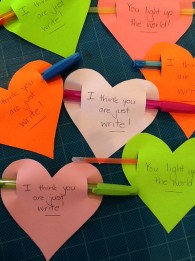 I am not a huge fan of Valentine’s Day. I personally believe that big companies make a lot of money out of naming days like this and I believe that it doesn’t build a great sense of community. I also believe that it alienates a lot of younger folk from feeling good about themselves. In spite of this, we decided to do something this Valentine’s Day since our family was on cooking the two course meal for the local Kids Club that our kids attend. Princess and Matey made special chocolate coated marshmallows (the planned strawberry dipping went out the window when the cost of strawberries doubled that day) to go with the chocolate cakes for a special treat for the kids. We also made a take home gift for each child. Princess and Matey cut out heart shaped pieces of paper and stuck either a glow stick (with the words “You light up the world”) or a pen (with the words “I think you are just write”) on the hearts. All the kids loved them and they were a hit. It led to a great discussion with my kids about how special they are as individuals and how they don’t get their worth from what other people do or don’t do.

School in Nepal: We have friends who are starting a ChristianSchool in Nepal. The school starts in April and our friends fly back over at the beginning of March to finalise arrangements. They currently have 19 students and teachers and a school principal. We began writing and drawing prophetic pictures for each child and teacher. Basically this just means that we are asking God how He sees them and then drawing and writing what God shows us about them. We are laminating the pictures so the children can put them above their beds and know that someone in Australia asked God for a picture for them and that was what they got. It is so exciting to be a small part of encouraging these students. It is not every day that you know someone starting a brand new school for poor children and orphans. We would love to visit these children one day and see who it is that we are praying for and asking God about who He sees them as. Interestingly enough, six months ago I was praying to God and asking Him to show me something about Matey when he gets older. God gave me a picture of him trekking the mountains in Nepal.

This also prompted us to research about Nepal for the next hour. Did you know that they are the only country in the world that doesn’t have a rectangular flag? From the photos we saw on the internet, there are a number of four storey buildings!! We also scoured our bookshelf and read about Nepal in the children’s encyclopaedias and country books. It made it so much more applicable now we were becoming connected in some way with the country. 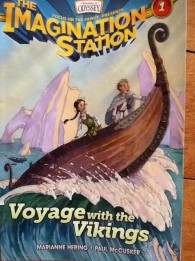 The Imagination Series: Matey’s latest book has been a ‘Focus on the Family publication, “The Imagination Station” series by Marianne Hering and Paul McCusker. We have read the first book called “Voyage with the Vikings” and it has enough suspense to make it a great read for eight year old boys (and their mums) who find it hard putting the book down. Definitely worth reading for that age group. Princess also loved reading it but more suitable for the younger boys. It is a quick read, suitable for early readers.

Finance skills: Due to being so preoccupied with the ‘Books 4 Cambodia’ project last year, the business finances for my husband’s business were not kept up to date. Bills where paid but the inputing into the computer and records were let lapse. Thus, I enlisted both Princess and Matey to help me match receipts with expenses, bank reconciliations etc. Princess is also adept at writing out cheques (after practising with old cheque books). I believe money management skills are an important lesson to learn. I had no idea about banking, checking bank account details and reconciliations etc until after I moved out of home and had to learn fast. Thus, I am starting early with my kids. They are quite capable of helping with this as they can read and match figures.

Life giving connections: We had the privilege of catching up with good friends Sunday evening. It is life giving to our family when we connect with certain folk. Do you have other friends/families that your whole family can connect with and come away feeling encouraged and built up.

I have joined a homeschooling group from our church that meets one afternoon per month. It is set up so that at the mums can be encouraged by praying over one another. Our kids have so many great opportunities but homeschooling mums in particular can soon feel overwhelmed and everything tends to be geared around their children’s activities. Thus, this group is primarily for the mums. It is a huge help that there are a few teenage girls who are responsible in looking after the children. The girls tend to do each other’s hair and nails or look through clothes. Princess loves connecting with these girls. There are a number of 8 & 9 year old boys which means there is a lot of testosterone flying around and they have a great time playing outside chasing each other.

Sport: Being a new school year, we have been sorting out the kids sporting activities. Princess is in swimming squad, about to go up another level, which means extra training. Plus with her jazz and tap dancing, she keeps pretty busy. Matey is a competent little swimmer as well and should be joining swimming squad in October after he graduates from his current program and when squad gets underway for the summer season. He also does tap and jazz dancing. Last year he was also doing basketball, soccer and gymnastics. We realised that he was doing a lot of sport but not necessarily loving it all. He has given up gymnastics and soccer. Hubby and I would love him to keep playing a ball sport as we believe it is so good for hand eye co-ordination and also valuable skills for later in life. After a season of being more interested, along with several other team members, in watching the dog on the sideline than where the ball was actually going, he has reduced our stress level by not wanting to do soccer this year. Thankfully we have more time of an afternoon and evening now he has ceased that and gymnastics. He seems more content with the individual sport of swimming and we need to support him in this.