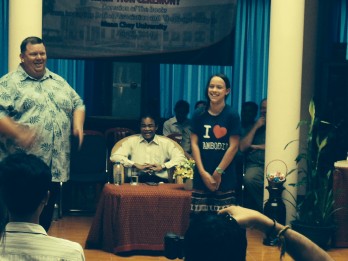 Our family have just returned from 3 weeks in Cambodia. We went with four other folk from our church. The aim of the trip was to partner with and run a children’s outreach program at two different Children’s Centres operated by ‘Imparting Smiles’. Steve and Noit Hyde run this ministry and have a huge vision to reach more children and educate them so as to change the nation and future of Cambodia. We were also helping the teenagers at these centres in their growth and leadership to continue running programs for folk in these regions.

This trip was also the culmination for our family of the ‘Books 4 Cambodia’ project where last year we collected 33,000 books for Steve to distribute to schools and universities in Cambodia. In planning the trip, we had hoped the container of books would be in Cambodia and we would have the opportunity to see some of the books delivered to the children and people we had intended them for.

This trip far exceeded our hopes in relation to this. We saw the container opened and the joy on children’s faces as they leafed through some of the pages of books. We had the opportunity to visit a school and deliver some books to primary aged children. The Principal of this school built a bookcase that very day to house the books. It was exciting to realise that the students are going to treasure these books and expand their worldview. Even in the Children’s Centre where we stayed, it was exciting to see the look of utter amazement on their faces as they leafed through some of the picture books and saw places around the world that they had never ever envisaged.

Several thousand books were also delivered to the University in the province, MeancheyUniversity. This University was so thrilled with the books, that they arranged a special service to honour Sarah and our family for collecting these books. We were totally amazed at the ceremony and it felt quite surreal. The faculty and staff all lined up and shook our hands, we sat on the podium, they supplied an interpreter for us, and Sarah was asked to give a speech. The Governor of the Province was present and spoke, honouring Sarah & our family. He mentioned Sarah’s choice of T-shirt for the occasion which read “I love Cambodia”. The President of the University also spoke. They then presented Sarah with a beautifully engraved plate and a wooden elephant and an engraved silver vase for our family. There was also a banner thanking us and a wall plaque on the bookcase. Most faculty members  and library staff came and chatted with us and thanked us. It was even shown on the national television that night. It totally “blew” us away. We felt very honoured. It was an amazing end to the project. 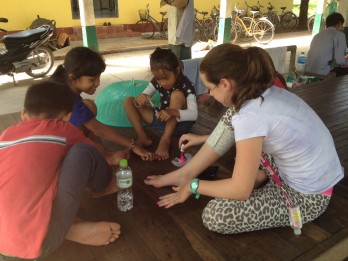 We really felt it was important as a family to do this trip together. I love doing mission together as a family. Some people have commented to us that our children are too young to really remember the trip, and even the trip we did three years ago to Mozambique. Sure, the children don’t remember everything, but they are learning beside us as we all change our lifestyle together. This trip really impacted them as they were that bit older.

These trips are also about creating family memories. We will never forget the taxi driver in Phnom Penh as hubby and the kids thought we were caught in a scam, but on persisting through several phone calls to a friend and finally directing him ourselves through trying to read street names, we reached our destination after a prolonged and scary ride. Matey ate frogs legs, scorpions, fried spiders, duck eggs with the foetus and feathers in it, and had a record 22 scoops of Icecream at the buffet. Princess and I utterly refused the insects but loved the Icecream. Things like this bind us closer together as a family.

Princess (11) suffered culture shock when we were at the first Children’s Centre. She struggled with the heat, language, tiredness and the food. After several days, lots of prayer from friends, and time out with me to have pizza at a nearby cafe, she was able to be herself and join in with the other children and thoroughly enjoy herself. She loved playing with the teenagers at the centres. Matey (8) loved the first centre we were at. There were more boys his age plus bikes and balls. The second centre he found hard. He was getting tired as he had missed out on a lot of sleep, there were many changes he was experiencing, lack of personal time with us, and he found it harder to control his emotions here. Matey also picks up on the spiritual atmosphere of the place so he was feeling various emotions that the kids from the centre were displaying. Most of these kids had been abandoned, whether by parents dying, in jail, or mum having been raped, don’t know the dad, and mum now across the Thailand border trying to earn a living. This doesn’t excuse Matey’s behaviour. We still needed to discipline him appropriately with it and we still need to look at how we can help him longer term react in a better manner. Sometimes it is just hard. Mission as a family can be messy. Life can be messy.

We deliberately travelled to Cambodia a couple of days earlier to try and acclimatise and sightsee a bit before the rest of the team came. This was a great family time and we are so glad we went early. We also came home a few days later. Our kids value swimming so staying at a nice hotel with a swimming pool really helps. On these days, they mostly just wanted to swim. On reflection, our kids at this stage are not really interested in touristy things and sightseeing. We went and saw the things they wanted to see such as the genocide museum and we let them set the agenda for when they had had enough and wanted to leave. Being quite gruesome, we only stayed an hour, but that was fine. We also realised that by the time the trip is finished, we just want to get home. One extra night stay at a nice hotel is great for the family, and helped us regroup as a family unit, but two nights was probably one night too many. The regrouping as a family at the end was so vital to do before we arrived home. It was also part of creating the memories. 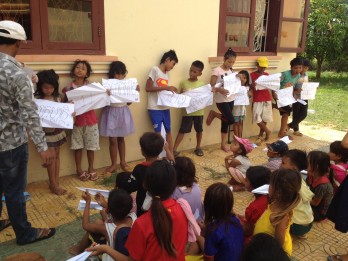 This trip was important for hubby and I to make it a winner for the kids. We don’t want to be parents who drag our children around after us whilst we are flat out doing ministry when our real ministry to our children is suffering. There is a tension to this however. Making it a great experience for the kids whilst also being able to minister as you would love to. One of the younger adults on the team expressed their frustration to me that I was putting my own children ahead of the team. They commented that I was always checking up on Princess and Matey to see that they were alright, had enough water etc, but forgetting about the other members. This is hard. As a parent, you need to look after your own kids, realising they are not mature. As a team member, I presumed the other adults on the team could care for themselves and not need me to be looking out for them. Obviously everyone is at a different stage in their own growth and healing journey. It was also an important insight for me, as I have always been quite an independent and assertive person, even when I was much younger. I presume others will act similarly to me, which is incorrect.

At the second Children’s Centre, I really struggled. I had put my children’s needs first, whilst trying to minister as much as I could also. This meant I was really tired. I was careful in the break between the two Children’s Centres to not do too much sightseeing and just rest and get refreshed, but I was still exhausted. I am someone who recharges on my own. To be continually around other people, in a strange place, speaking a different language, and toss in premenstrual as well was just too much. The first night at the second centre I lost it. It was extremely hot, I had less than an hours sleep and was feeling rotten. Tears came easily. Hubby was badly sunburnt and didn’t sleep much either. The next day, Hubby made the decision for us to sleep in a nearby air conditioned hotel with Matey who was also not coping with the heat. I saw this as same kind of failure at not being able to cope but hubby won out, justifying that I needed to get sleep to remain sane. We allowed Princess to make her own decision about where she slept, and she decided to stay in the girls bedroom at the Children’s Centre. We knew she would be safe there and she was excited to be with the other girls and have a little bit of independence. 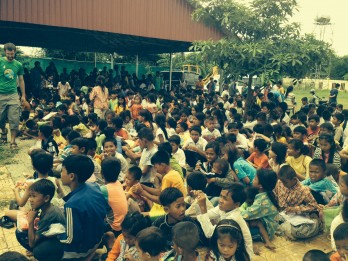 This trip also helped clarify for me where my heart lies in relation to ministry. Prayer ministry, healing and prophetic ministry is what I love. Observing the girls who were really struggling, whether because their parents had taken them from the centre and sold them into slavery and then they were raped and dumped back across the border and re admitted to the Children’s Centre, or the girls who really struggled with their schoolwork or had low self esteem – my heart goes out to them. I want to be able to get alongside them and encourage them longer term.

The trip taught us a lot. We knew it would be a turning point in our family’s life and our future ministry. We are still processing it all as a family. I am excited, though, that Princess, who never ever wanted to go to a third world country again after Mozambique, can’t stop brainstorming how we are going to be able to save the money required to go back again next year. It is not just the initial high after coming home. There truly has been a major change in her. At this stage, she would be happy to live there for three months. A huge turn around!! My goal achieved!!