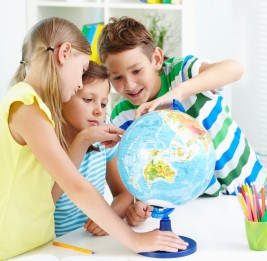 Let me be honest here & say that I have never raised a world changer ie someone who has changed the world on a large scale. I have, though, tried to teach my children to be aware of people around them and how they can help make other people’s lives better, even if for only a few minutes. So in a way, I am raising (small) world changers who change other people’s worlds. But, there is still time. My kids are Princess (16) and Matey (13). Every child has the potential to change the world. Our role as parents is to spot their strengths and giftings and help them develop in them to their full potential.

I find it very inspiring to listen to TED talks on the radio/internet. Recently I heard Easton LaChappelle talk (http://www.3ders.org/articles/20130716-easton-lachappelle-ted-talk-3d-printed-brain-powered-robo-arm.html  about how as a 14 year old, he developed a robotic hand controlled by a wireless hand glove using Lego and electrical tape. He then met a 7 year old girl who was born without an arm and her parents had paid $80,000 (USD) for a prosthetic arm from the elbow to the finger tip but it could only do a couple of movements. He then invented and made a fully articulated robotic prosthetic arm for the girl with the same functionality as a human arm costing around $250 (USD). He is now 17 years old!! That to me is a world changer.

Imagine being his parents. He composed all this in his bedroom, using chemicals to heat and get the right consistency for the plastics. Imagine the frustration at times for his parents but also the permission giving that his parents must have given him, and the support, to allow him the freedom and encouragement to do this.

Belle Beth Cooper has compiled a list of 9 Inspiring TED talks, all by kids under 18 years old. (www.attendly.com/9-inspiring-ted-talks-all-by-kids-under-18/) Easton La Chappelle hasn’t made that list but another boy, Taylor Wilson built a nuclear fusion reactor when he was 14 years old in his parent’s garage. He is also now 17 and won an award for developing a detector for $100+ to replace the detectors that Homeland Security have that are worth $100,000+. Another example of a world changer.

As parents, what can we do to help our kids reach their potential?

Firstly, we need to know our children and see what their strengths and giftings are. Challenge them and find out new things about them. Help them develop in these areas.

For the child who sings and dances all the time, it may mean taking that child to singing, dancing, acting classes even though it is inconvenient for us and cuts into our evenings. For a child who is fanatical on being a basketball superstar and who is showing potential, it may well mean that the family becomes involved in coaching and supporting the club.

A number of years ago, my sister gave a 9 year old nephew an interesting birthday present. It was graph paper and pencils. The nephew loved it. He had a father who worked with farming equipment and was his hero and this boy loved inventing new pieces of farm equipment that would help his dad do his job better. What a great present to further that boy’s interest and skill in drawing and inventing.

Secondly, do not despise small beginnings. Even though my kids haven’t changed the world on a huge scale, there are a number of ‘small’ things they have done to make this world a better place and to bring hope and comfort to people. Plus, they serve in numerous ways. Both Princess and Matey give 3 hours twice a month to serve in the Kids Ministry at Church, enabling the parents to worship and listen whilst the kids learn and do in an atmosphere that best suits them. They both serve on our Church’s Healing Rooms team, praying for people one Saturday morning per month.

When Princess was 10 years old, she helped co-ordinate a process by which she collected 30,000 kids books for children in Children’s Centres and Schools in Cambodia so that they could learn to read English.

Matey at 13 years old has already collected and donated over 25,000 pairs of brand new socks to homeless people here in Victoria (www.2pairseach.com.au). Matey has a heart of compassion, underneath his strong exterior, and this shows in his undertaking a project that helps homeless people in a caring manner. Plus he is a member of the local Junior Fire Brigade and a member of Air Force Cadets, both of which involve community service.

What are your child’s strengths? I challenge you to spend some time this week really thinking and praying about their potential and how you can help them to take the next step.